The famine broke the Ukraine, but she got to her feet and confronts the evil – Poroshenko 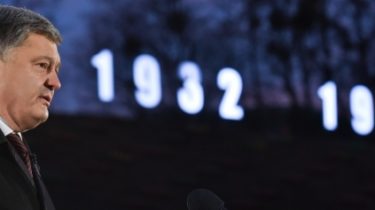 The famine broke the Ukraine, but she got to her feet and confronts the evil – Poroshenko

The head of state drew Parallels with the present and explain why you need to remember the historical tragedy.

The story only becomes a story when the events of the past passed through the mind and heart of the descendants, and human memory is like a through and through wound. These words of the historian Michael Sikorski gave in his speech at a ceremony honoring the memory of the victims of the Holodomor of 1932-1933 , Ukrainian President Petro Poroshenko.

“Genocide of the thirties – a direct result of the loss of statehood in the twenties. The occupation of Ukraine by Soviet Russia became possible due to separation and infighting of the political forces of the young Ukrainian state. They were in and out of coalitions; rocked the street, weaving against each other khutoryanskaya intrigue, and even rebelled. They naively believed that the ataman is the best form of democracy. Like laid. It’s like their jinxed… Passionate about the internal war of all against all, they pretended not to notice the black clouds, which moved to Ukraine from the North, East and South. Never heard thunder and never saw the deadly lightning, while it does not kill,” reminded the head of state pages of history of Ukraine of the beginning of the twentieth century, hinting at a possible oblivion part of modern domestic politics.

The couple honored the memory of Holodomor victims

Poroshenko also recalled the famous quote Vasily Klyuchevsky: “history is not a teacher but an overseer – it teaches nothing, but only punishes for ignorance of lessons.” In his opinion, it makes no sense to argue, as if fate of Ukraine before, because now she is in the hands of the current generation. “Alternative history, or as they say, “ecobiology”, is actually just the genre of science fiction. The story really has no subjunctive mood. Of course, independence does not guarantee against crop failures, but we all know: in the neighboring Soviet Union countries, Ukrainians are not destroyed by the confiscation of food. It is therefore, clear: to keep Ukraine their independence, no planned famines would not have been as well. Collectivization and suppression of the resistance of the peasantry, destruction of the Ukrainian intelligentsia and the liquidation of the Ukrainian Churches have not produced the result they expected in Moscow. And then the totalitarian regime planned the famine and who brought it to life on a genocidal scale. The purpose of the Empire was the destruction of all possibilities for national self-determination of our state of Ukraine. Implementation of this goal included the elimination of the national-conscious part of contemporary society, especially the peasantry and the intelligentsia,” reminded the Ukrainian leader.

Poroshenko stressed that so far the enemies of Ukraine horrified the thought of this horrible crime and the lies and objections, trying to disassociate themselves from him since and now blinded by the same goal – the destruction of the Ukrainians as a people. “Advocates denial of the Holodomor – genocide live mainly in one geographical point. They hide from the scientists, the archival documents and the relevant court banned the works of Ukrainian authors. You can, of course, to clean up from books about the famine suffering, the Library of Ukrainian literature in Moscow. But the history of the famine to strike impossible,” Poroshenko reminded them.

See also: Remember the future! Turchinov urged Ukrainians candles to honor the victims of the Holodomor

And added that Ukraine is alive, and not only preserves the memory of the terrible page of the past, but knowingly and independently creates their own future. “Thirty-second and thirty-third broke down my nation, but Ukraine and Ukrainians did not break. After decades of destruction, Ukraine rose to his feet. In ‘ 91 put an end to the history of the Empire. And now resists attempts to revive this Empire and confidently protect the borders of freedom – freedom and freedom of Europe”, – said the President of Ukraine.

In addition, Poroshenko invited the business community to help with the creation of the Museum of the Holodomor. “In 2007, at this point there is a Memorial complex, which became a place of pilgrimage for many Ukrainians. But the Museum part, which would correspond to the best world samples memorial Museum of art, is still not built,” he said.

The cause of death was Ukrainian. Such entries in the acts of the death of local villagers found the researchers of the famine 30-ies in the archives of Sumy region. And demographers on the eve of the 82 anniversary of the Holodomor called scientifically proven number of victims of the Kremlin of genocide against the Ukrainian people. About four million starved men, women, children and the elderly.