Klimkin told Ukrainian version of the “road map” for Donbass 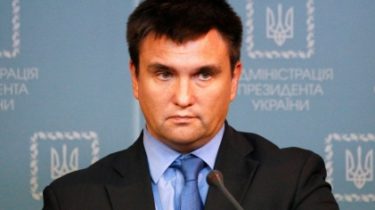 Klimkin told Ukrainian version of the “road map” for Donbass

The document will be presented at the meeting in Minsk.

Sweden will make every effort to the Association agreement of Ukraine with the EU signed as soon as possible. This was stated by Minister of foreign Affairs of the Scandinavian country, Margot wallström, said in the story TSN.19:30.

She stressed that Ukraine has done a lot on the legislative level, but must continue reforms in the capture rate. At the meeting, officials with the Ukrainian colleague also talked about the war in the Donbass.

Read also: the Russian Sergeant told how the military was forced to go to Donbas under threat of dismissal

Pavlo Klimkin said that on Tuesday in Minsk scheduled presentation of Ukrainian “road map” for the Donbass. Its main ideas are the emergence of EU supervision on the Ukrainian-Russian border, the withdrawal of occupation troops from ORDO, then the holding of elections authorities. According to the chief Russian diplomat, Germany and France support such a plan, but with Russia a common vision of solving the situation there. “I’m going to do the main emphasis on the security issue and the humanitarian issue, in particular the liberation of our political hostages, and providing access to them by international organizations, the red cross”, – said Klimkin.

Previously Klimkin called for two alternativesinskip agreements. In his opinion, this destabilization of the Russian Federation of Ukraine, or “freezing” of the conflict in the Donbass.

This was at a meeting with Pavlo Klimkin said Margot wallström. The Minister for foreign Affairs of Sweden is sure that Ukraine has done a lot on the legislative level, but must continue with reforms. First of all, in the fight against corruption and the issue of energy independence.