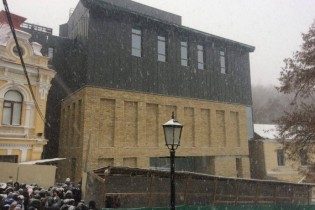 Kiev has already dubbed it “the crematorium”.

In Kiev on Andriyivskyy descent opened the facade of the new building of the Theatre on Podil, which has caused outrage in social networks, the correspondent of TSN.

Some people welcomed with applause updating historic streets, however, were unhappy: a group of people together with a representative of the party “Freedom” Igor Miroshnichenko shouted “Shame”.

Previously Kiev was outraged by the photos from the reconstruction of the building, published in Facebook. According to them, the design of the new building is more like “unit” or “crematorium” and does not fit into the architectural ensemble of the old street.

To make theatre a few years ago a team of the Kharkiv architect Oleg Drozdov. The scandal surprised him. He assured that the experts have made every effort to gently enter the context. At the same time, he recognized that the object itself is very large for the Andreevsky. Also the architect added that the metal in a few years will change color and become gray-green, “antique”.

The coordinator of the Council of Kyiv has always been urban Gregory Melnichuk told who made the new building of the theatre on Podol will the new theater have a negative impact on the image of the city from a tourist point of view.