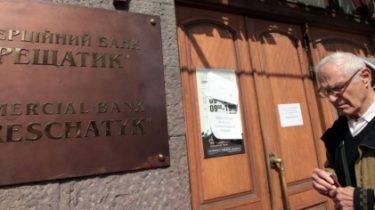 A shadow falls on relatives and friends to the management and shareholders of the Bank.

There is a risk of withdrawal of assets of the Bank “Khreschatyk” 0.25 billion due to court decisions that legalize scheme close to the managers and shareholder of the Bank people.

This statement was published in the Deposit guarantee Fund of individuals.

“The Fund of guaranteeing the deposits of individuals said that there is a risk of withdrawal of assets of the Bank “Khreschatyk” — 0.25 billion as the result of court decisions that legalized schemes, realizuyuschiesya investors (relatives of one of the leaders of the Bank) and borrowers — legal entities (associated with the shareholder of the Bank)”, — stated in the message.

See also: Protesters who under NBU require return of the Deposit, can’t call your Bank

In addition, the Fund noted that the group of borrowers that is associated with the shareholder “downtown” of the people, filed a lawsuit in the Economic court of the capital.

In it, they need to stop their obligations to the Bank “Khreshchatyk” and allow you to use the property in 0,47 billion, which was previously transferred to the collateral for the loans. This real property includes land in the Theophany, apartments and non-residential premises on vyshgorodskaya in Kiev.

“Group of borrowers who are connected persons of the banks filed statements of claim to the Economic court of Kyiv with a demand to recognize the terminated obligations to the Bank “Khreshchatyk” and to stop any encumbrances on the real property collateral with a value of 0.47 billion, which was transferred to the provision of loans”, — reported in the Fund.

See also: Depositors of the failed Bank on “Michael” blocked the Khreshchatyk in Kiev

According to the DGF, the borrowers argue that in early 2015 they signed a contract on the assignment of rights requirements on deposits of 8 million dollars. It soon appeared that these investors are relatives of one of the Bank managers. He, in turn, was a member of the Board “Khreschatyk” before the introduction of the interim administration.

The Fund argue that these treaties were concluded in the period of the implementation of Bank liquidation, but prior to filing of claims.

“The economic court of Kyiv (judge Litvinov) 25 November 2016 the decision, which claims one of the borrowers satisfied in full. With no opposition on the merits of the claim into account by the court were not accepted, including was wrongly denied two motions Bank on appointment of technical expert examination of the above documents, which resulted in the adoption decision, a violation of both substantive and procedural rules. Bank Khreschatik prepares an appeal against this decision”, — noted in the DGF.

Let’s add, that on December 1, the capital’s Economic court will consider the case of another borrower, who was also involved in the scheme of withdrawal of assets from the Bank “Khreschatyk”.

Recall that in June it became known about the beginning of procedure of liquidation of the Bank “Khreschatyk”, which runs until June 2018.

Recognized insolvent Bank “Khreschatyk” has exposed on sale of bonds that were not secured and issued by firms with fictitiousness signs. The Fund of guaranteeing the deposits of individuals conducted a sample audit of these documents and 85% among them were unsecured.