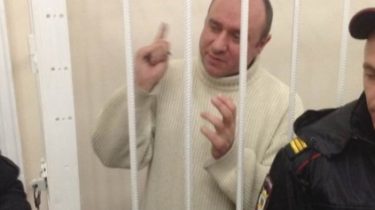 In addition, the “king of the cemeteries” must pay a fine of 5 million rubles.

Occupation authorities of Crimea has sentenced to 9 years in a strict regime, one of the ideologists of the “Russian spring”, says the story TSN.Sores.

In addition the separatist has awarded a fine in the amount of 5 million rubles (about 90 thousand dollars – approx.ed.).

Note, Gennady Basov was the leader of the party “Russian block” and actively supported Russia’s invasion of Crimea, engaging in provocations and anti-state activities. After the Russian annexation of the Peninsula led the funeral service in Sevastopol, where he got burned on a bribe.

As you know, Basov was arrested in late September 2015, on charges of receiving 9 thousand dollars of a bribe from one of the entrepreneurs who work in the cemetery, “5-th kilometer”. The businessman claimed that the Bass repeatedly demanded money for the opportunity to continue in the cemetery business.

Crimean separatist disagreed with the verdict of the Russian Themis and is going to appeal to the court of human rights in Strasbourg.

In addition to arresting the separatist awarded a fine in the amount of 5m rubles. Gennady Basov was the head of the party “Russian bloc”. After the occupation of the Peninsula led the funeral service in Sevastopol. There he got burned on a bribe. With the verdict of the Russian Themis the Crimean separatists did not agree and intends to appeal to the decadent Europe court of human rights in Strasbourg.