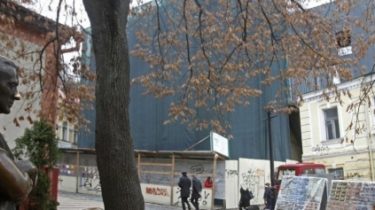 TSN.ua has collected the TOP 5 controversial construction projects in Kiev.

Changes in the architecture of the city center in most cases, cause serious resonance among the inhabitants of Kiev. It is not surprising, given the mostly dismissive attitude to the historical heritage on the part of new developers, who allow themselves, if not the destruction of monuments, significant violations of the architectural ensemble.

One of the last of these scandals was the reconstruction of the building of the Theatre on Podil. Kiev vozmudel modification “Bulgakov” Andrew’s descent. When the network appeared the photo of the upper floors of the building, liberated from the temporary facade, Facebook erupted with criticism. So yesterday, November 29, at the official opening of the facade, there was a considerable number of those wishing to see the reconstructed theatre in their own eyes, despite the fact that the event took place during working hours. 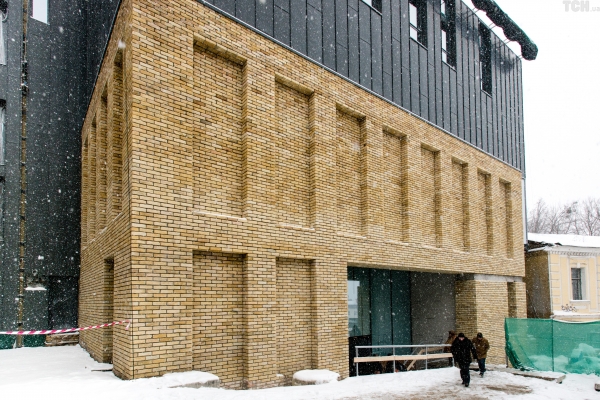 Architects say that they tried as best they can “get into context” but stressed that “each era has its own language”, so I decided not to copy the buildings of the last or the last century. Part of Kiev met открытиt facade with cries of “Shame”, but there are still довольныt and reconstruction – they are happy about the fact that Kyiv is not there another creation in the style of the Vozdvizhenka and emphasize – the city should organically change.

This is not the first scandal with the construction of Andrew descent. For a long time, this street has managed to retain its historic character, although it should be noted, walked and reconstruction, so the part of the buildings was badly neglected. However, in 2012 SCM Ukrainian oligarch Rinat Akhmetov decided to build on the site of the former factory “Yunost” eight-story business center, hankering for the familiar view of the street. Then was destroyed three facade of the building. Protests from urban activists forced the company to abandon the plan. Akhmetov then promised that SCM will return the original look to the destroyed facades, and the factory site appears low-rise art-space. So far, the site is not built up.

The scandal surrounding the construction of the St. Andrews descent erupted

In place of the demolished houses is going to build a shopping-office center company that is associated with the richest man in the country – Rinat Akhmetov. How to change the face and purpose of the most famous streets of the capital after the amputation of historic buildings on it?

Kyiv Podol did not give rest to developers. In 2012 a scandal broke out around Gostiny Dvor. The year before he was removed from the list of architectural monuments of Ukraine, which is under state protection. After that, the building was bought by the company “Ukrrestavratsiya”, which rented the premises since 1994, and began construction. It was envisaged that a new shopping arcade that will host the Mall, will bring to the architecture of the 19th century. Activists claimed that in fact a former architectural monument should become a shopping centre with a glass dome and car Parking for 340 places that would turn the contract area to the biggest Park in the center of Kiev. Also had to be transferred a monument to Peter Sagaydachny. 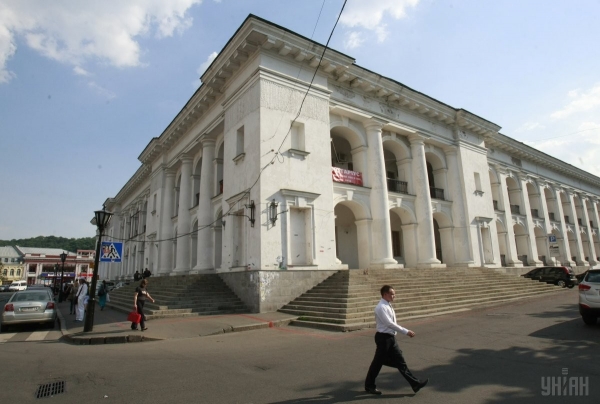 Gostiny Dvor before the reconstruction

To protect the “Dormitory” were numerous activists, they occupied the building and held in his backyard art event. However, members of the public started to attack the unknown men in camouflage and “Berkut”, to drive them out of the building. As a result, in February 2013 in Gostiny Dvor, a fire broke out, activists have accused the developer of arson. In General, for Kyiv this phenomenon has become familiar: a fire used for the withdrawal of the buildings from the register of monuments and thus get the building permit.

To save the monument failed after Euromaidan. In July 2014 , the Kyiv city Council cancelled land acquisition for the reconstruction of Gostiny Dvor in Kontraktovaya square. In November, the building was returned to the status of a monument of architecture. And in December 2015 , the state property Fund today broke the lease Gostiny Dvor “Ukrrestavratsia” that everything is associated with a confidant of the President of the fugitive Viktor Yanukovych Andriy Kravets.

The chief architect of Kiev: Gostiny Dvor is a pain

Alexander Svistunov has told about plans on Kontraktova square.

Under threat of destruction due to the developers constantly is Sophia of Kyiv national reserve, which is protected by UNESCO. The construction of the so-called buffer zone of the monument – on the territory of the Upper city are carried out without adequate research on the impact on the physical conditions of existence of the monuments of the complex, as well as on the historical and urban environment. So, due to the construction, in particular, raises the groundwater level, which can lead to subsidence and destruction of the Cathedral. 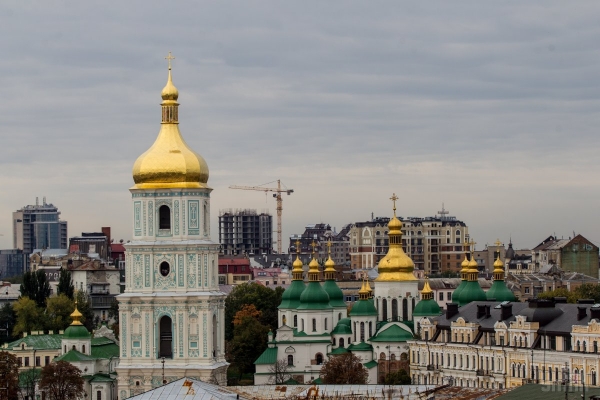 Behind the walls of the Cathedral was erected Parking and a fitness centre, which resulted in raising the water level. Also within the buffer zone was the building nine-story apartment complex at the address: vul. 17-23 Oles Gonchar, which, in 2013, the court declared illegal.

In 2015 the 39th session of the UNESCO found that in the buffer zone near the monument is at least five facilities violate the established norms. This, in particular, the Museum and the Patriarchate of the UOC-KP in Tithe lane, apartments for air conditioning and Klovsky descent, the scandalous construction.. UNESCO urged to reduce the height of buildings is to take it apart brick by brick extra floor to reduce the load on the ground.

In the capital, the bell tower of St. Sophia leaned 12.5 inches

The bell tower of St. Sophia has a slope in the direction of St. Sophia Cathedral. Now in the reserve drilled boreholes to examine the soil around and to understand what is happening with the historical landmark.

In April 2016 there is information that in the buffer zone – near St. Michael’s Cathedral – are going to build underground Parking: activists warned of the possibility of the laundering of budgetary funds and the sale of land.

The capital, activists opposed the new office center. And expertise in the case of the square has confirmedthat the draft land allocation and land sales Mikhailovskaya street 24-26 in Kiev does not correspond to the law. 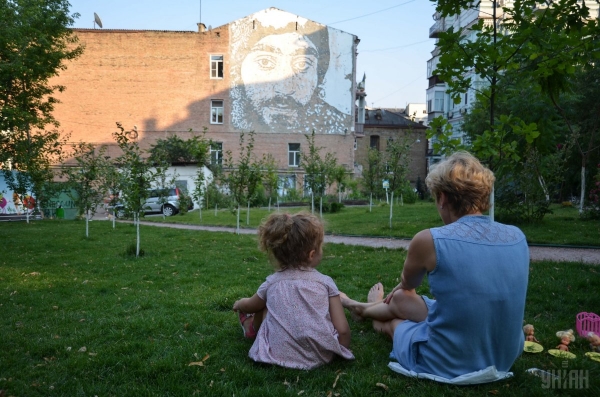 Luxury high-rise on the Grushevsky street became one of the main symbols of the destructive development of Kyiv. Construction of 22-storey building began in the early 2000s – at the Mariinsky Park near the Verkhovna Rada. Experts have determined that this residential complex of VIP-class to upset the balance of slopes of the Mariinsky Park and could pose a serious threat to the ecological situation. Media reported that the construction caused the cracks in the Mariinsky Palace. 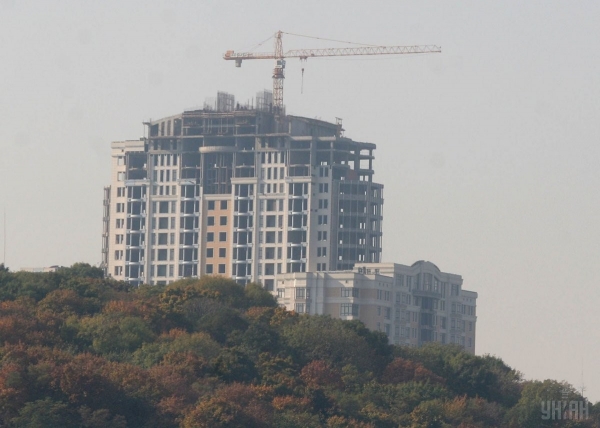 Construction of a skyscraper on Grushevskogo 9A

In addition, the complex spoiled classic view of the Dnieper slopes, which was a business card of Kiev, it is located on landslide-prone hills. It 150 apartments, total floor area is above 1000 sq. m. One of the premises belonged to the firm Tantalit, which was owned by Yanukovych’s residence.

Of course, this is not a complete list of the resonant buildings in the centre of Kiev, but only one of the high-profile cases. In addition, many scandals occur in the residential areas of the capital, which enterprising entrepreneurs have also decided to turn into a solid building, destroying space – squares, parks, or just convenient for the movement of people sites like this happened in the underpass near the metro station “Heroes of Dnepr”. Such cases, fortunately, do not leave indifferent activists who continue to fight for their city.