On the Maidan, recalled the terrible events of the night of the crackdown on activists by “Berkut” 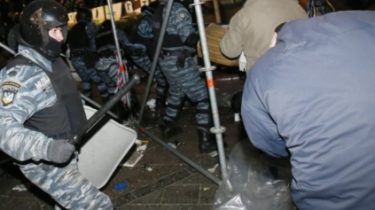 On the Maidan, recalled the terrible events of the night of the crackdown on activists by “Berkut”

On the night of 30 November on the Maidan injured at least 79 people.

On the night of November 30 on Independence square came a dozen people, among whom were victims of the violent dispersal by riot police of a peaceful protest, said in the story “Sedanka z 1+1”.

With bells in hand and a symbolic chain of unity and freedom activists went to St. Michael’s Cathedral, where a bloody night sheltered the injured students.

This year the participants recalled the terrible events under the anthem of Ukraine, because then the forces are not given to fulfill it. Force against the activists was used about 4 o’clock in the morning.

At the hands of “Berkut” on November 30, 2013, affected at least 79 people. “Satanic “Berkut” we were then attacked. We had 350-400, and twice that many. One part was waiting for, and the other started to descend,” recalls an eyewitness.

That night “Berkut” broke girl Oksana’s head and badly damaged leg. “It was so awful that even just hard to remember when there were rounded up everything and cleaned everything possible and impossible. Three years passed and no one remembered. Forgotten. It is very difficult that all was forgotten, and these people remember,” she says.

This night was the turning point of the revolution of Dignity and in the minds of Ukrainians.

“We called this campaign “the Day when Ukraine woke up” because the next day at the call of the children began to gather thousands of people. To protect them and their dignity, and the country as a whole”, – said the participant of the action.

Half a dozen people who 3 years ago was severely beaten by “Berkut” on Maidan, came by night to the Central square of the capital. It was in the night of 30 November 2013 in Kiev violently dispersed the Maidan. The events of three years ago and remembered the night.