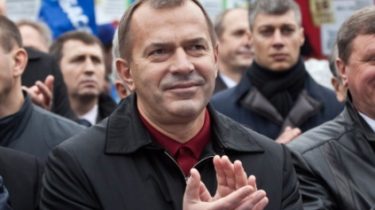 According to him, Yanukovych told him to start preparing a peace Treaty.

The former head of the presidential administration of the fugitive Andriy Klyuyev said that Viktor Yanukovych was not interested in the shooting of activists Euromaidan, because he called for negotiations after the massacre.

This Klyuyev said on the Russian propaganda channel Russia-1, where he was invited along with former Prime Minister Mykola Azarov and one of the participants voting for “dictatorial laws”, Vladimir Oleynik, all of which, after the bloody executions, ran away from Ukraine.

“I was ordered to begin negotiations with the three foreign Ministers of France, Poland and Germany…February 20 after lunch Yanukovych has called me into his office, this time in the office was Steinmeier”, – he said.

See photo: a Crowded court in Kiev and quiet Yanukovych: as questioned former President of Ukraine

Klyuyev also added that Yanukovych told him to take the three Ministers to his office and begin to prepare a peace Treaty. It is known that the Ministers arrived in Ukraine at about 10 am 20 February.

“We day was preparing a peace Treaty, Yanukovych could give the command to shot the people?” asked in the Studio said.

The former head of the AP Yanukovych in the broadcast of the show also read the alleged transcript of the interrogation of the sniper, which, according to him, were caught by the representatives of the Maidan. However, he did not explain where he got the Protocol all appeared.

The sniper he called Vladimir, Deglaze and added that he was Georgian. This name had never been mentioned.

Read also: Yanukovych assures that he was ready to perform “peace agreement”

Klyuev said that the alleged sniper in the beginning arrived in Kiev, then moved to Odessa, from Odessa then it was brought back to Kiev. According to him, he went to the week on the Maidan, the dislocation was looking, where to shoot, what to do, how.

“Therefore, Yanukovych is even was not profitable,” – said Klyuyev.

In turn, the Prime fugitive added that the 19th night, the sniper was told to be ready at 6 am it was brought to the building from which he shot.

Azarov couldn’t remember the name of the hotel, which supposedly had a sniper, and where he was shot, starting at 8 am. Neither Azarov nor Klyuyev did not name who exactly led the sniper.

Then Klyuyev said that it was the hotel “Cossack”.

Read also: Yanukovych “not remember” telephone conversations with Putin during the fiercest fighting on the Maidan

“I’m sure this Protocol will give lawyers “berkutovets”, because these people deserve respect”, – said Klyuyev.

“And they departed from independence only when on them, completely naked people, opened fire”, – said Mr. Azarov.

We will remind, on November 28 in the Svyatoshinsky district court of Kiev held the second hearing, which questioned Viktor Yanukovych. Deprived of the title of President communicated with the judges via video conference.

Yanukovych, in particular, has told that does not remember how he called Russian President Vladimir Putin and former heads of the interior Ministry and SBU on 20 February 2014. In addition, he assured that he did not give instructions to disperse the Maidan, “Berkut” acted at their own discretion. The blame for the deaths of protesters, he blamed the leaders of the Maidan. In addition, Prosecutor General Yury Lutsenko during interrogation has declared Yanukovych the suspicion of treason.

The interrogation lasted about six hours after that, Yanukovych gave a press-conference for journalists. Here the ex-President said that he knows nothing about eight “KAMAZ”, which took out his estate of Mezhyhirya. He also assured that he had no money on accounts in foreign banks, and all funds have been arrested.

He answered questions mainly from Russian journalists. Yanukovych called the stay in Russia the worst time of his life and said he was confident that still has supporters among Ukrainians.