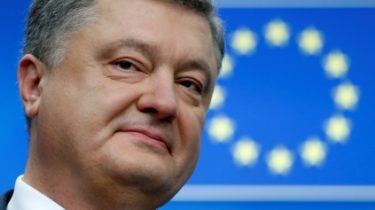 This property is not subject to the electronic Declaration, indicate to the Agency.

Deputy head of the National Agency for prevention of corruption and the head of the Department of verification of declarations Ruslan Radetsky radically changed its position regarding the duties of the President of Ukraine Petro Poroshenko to declare a Spanish Villa. It happened after the story of the program “Schemes” in which the journalists claimed that the head of state pointed out the house near Marbella in its Declaration.

See also: NABOO and spectaculator take on the “Panamanian offshore”

As noted transmission “Scheme”, administration of the President Poroshenko argued that the President should not have to declare the Villa, as noted ownership of the company, which it owned, and in the National Agency for prevention of corruption (NAPC) at first said the opposite.

Deputy Chairman of the NAPC Ruslan Radetsky without reference to the President said: “He (the declarant – ed.) must specify this property. He is obliged to specify all the property which belongs to him. Through a legal entity or physical person. That is, if he has the beneficial ownership or he is the ultimate beneficial owner, he is obliged it to make”.

According to him, the failure of Villa to the property, even if it is decorated to the firm, testifies to the incompleteness and irregularity of filling of the Declaration, to which the Agency will pay attention to.

However, later, after the publication of the investigation caused a resonance, Radetzky wrote in an English letter to a lookup request from Radio Liberty: “While Petro Poroshenko and his family members do not use the said property for profit and a legal entity-the owner of the property disposes of its own, this property is not subject to the electronic Declaration, in accordance with the law.”

The Chairman “of the Public lustrating Committee,” Alexander Drik believes that, at the NAPC there is a clear influence of the presidential Administration.

Co-author of the law on electronic Declaration Dmytro Kotlyar said that “from the facts already publicly known, it seems that Poroshenko still should have been declared a Villa. But that is to be installed must be checked NAPC”.

Kotlyar also said that the new review Radetzky suggests that the NAPC has already completed the verification of the declarations of the President. However, he stressed that the NAPC “even physically can’t do it” because the legal procedure for conducting inspections of declarations not entered into force.

In response to the Deputy’s request to check adequately the Ukrainian President declared a Spanish Villa, the people’s Deputy Serhiy Leshchenko on November 11 in the NAPC reported that the verification of declarations they define themselves. Also in response to the Deputy Chairman’s signature NAPC Natalia Korchak says: “Specified in Your request the information on Poroshenko P. A. will be taken into account during the National Agency for prevention of corruption Declaration verification of a person authorized to perform state functions or local self-government.”

Recall that in their Declaration, Poroshenko statedthat he owns an apartment building area in the exclusive village of Kozin, Kiev region, which he acquired in 2012. He also has two apartments in Kiev, apartment in Vinnitsa. Another apartment in Kiev was listed as joint property with his wife. The President also owns non-residential premises in Odessa. In addition, the Declaration contains the base of rest “the Swan” in the Odessa region.