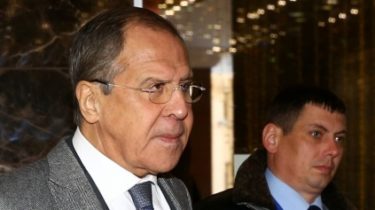 They called for an early resumption of work of the economic block of the contact group on Ukraine.

The Minister of foreign Affairs of Russia Sergey Lavrov said that the Minsk agreement “stalled” and the countries “Norman Quartet” is not yet possible to agree on steps in the sphere of politics and security.

“No breakthroughs at the meeting of foreign Ministers of “Norman Quartet” was not”, — said Lavrov, adding that at the meeting the parties failed to agree on the sequence of steps to implement the Minsk agreements.

According to Lavrov, foreign Minister “channel four” called for the early resumption of work of the economic block of the contact group on Ukraine.

Lavrov also noted that there is no need to create a paramilitary mission of the OSCE in Ukraine.

See also: Klimkin told what issues will be discussed at “Normandy” meeting in Minsk

Recall that “Norman” meeting at the level of foreign Ministers held today, November 29 in Minsk. There gathered the foreign Ministers of Ukraine, Germany, France and Russia. The Ukrainian delegation in Minsk will be put as priority security issues, and humanitarian.

The release of prisoners, security policy and humanitarian situation in the temporarily occupied territories of Donbass – these questions today, the official Kiev will raise in Minsk. After lunch in Belarus will meet the foreign Ministers of the countries participating in the so-called “Norman” format.