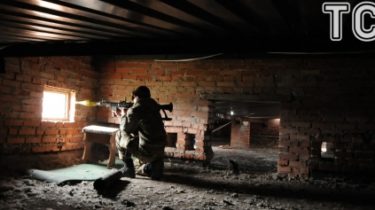 Enemy 37 times fired at positions of the Ukrainian military.

During the last day fighters continued attacks of our positions. All in all there were 37 attacks. This is stated in the summary of the press center of staff ATO.

So, in the direction of Mariupol in Shyrokyne fired three tanks. Also fixed fire from 122-millimetric artillery and APCS. Mortars of various calibers, the occupants fired on the Talakovka and Shyrokine. Rocket-propelled grenades and heavy machine guns – sirocina, Marinka, Pavlopol and Water. With the aim of preserving the life of the personnel of the Ukrainian military were forced once to return fire in the area of Shirokino.

Read also: Militants of the “DNR” promised to release the two prisoners on Tuesday morning

On Donetsk the direction from mortars fighters fired at Lugansk, as well as from grenade launchers, heavy machine guns and small arms across Avdeevka, Experienced, southern, Zaiceva and Luhansk.

On Lugansk the direction from rocket-propelled grenades were fired at the Village Lugansk.

Recall that in the area of ATO Ukrainian military disappeared. Around 16.00 26 Dec 2016 near PPC “gold” two soldiers of a military unit who carries out tasks in the Luhansk region, returning by vehicle from the hospital, strayed from the route and drove into the territory controlled by the militants. Now communication with them is absent.