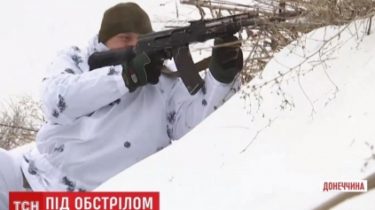 Defenders of Ukraine was forced to give fire resistance.

In the South of the Donetsk region increased the intensity of militant attacks on the positions Ukrainian Marines. The ceasefire is not observed, witnessed journalists, says the story TSN.19:30.

Military joke on fresh craters from powerful projectiles. “We help clear the field. Thank you! You can still more?”, – they laugh. That with the advent Saturday, December 24, enemy weapons snowcity, none of them believed. Changed from another truce for a bit. “Much of a difference we noticed. I worked RPG, LNG, threw here a WOG, strelkotnya – “Dasha”. All, as usual,” says a marine “Koba”.

Ukrainian defenders in the area of Water say that the attacks on their strongholds is applied to three firing batteries of two or three mortars each. Although the regime of complete ceasefire in the Donbas has been in place formally for more than 48 hours. But on the frontline of Azov “silence” great to hear another entrance to the front.

Sunday evening from 122-millimetric artillery shelled positions near Lebedinsky, on Monday afternoon at the same direction of lay 120 mines and the enemy tank shot. From the attacks of enemy fighters hiding in bunkers, but no answer. “They brought up for this convoy. And since last night intensified shelling,” – says the military. However, when in advanced positions beyond the enemy infantry – Marines are forced to respond, because there is a threat to the lives of soldiers. And even in this scenario in the first minutes only the commander gives the order to take position and observe – only later, when the activity of the enemy really becomes threatening, you hear the command to open fire.

A few minutes of the Streltsy “soothing” worked perfectly. The fighters fell silent, and the Ukrainian military began to discuss how to replace a separatist flag in the field for the Ukrainian fighters managed to set the flag within sight of the Marines. To tolerate such an outrage the military is not going to, so already ordered the new flag to the front.