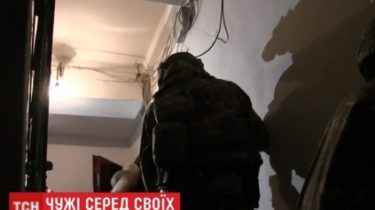 Locals gathered information and transferred it to militants.

In the area of anti-terrorist operation exposed a network of informants occupation, which collected information about the deployment and movement of Ukrainian military units. Three residents of the Watershed to work for money, says the story TSN.19:30.

“Went to the places of dislocation Voorujennyh forces of Ukraine. Recorded their number and move,” admitted Sergei Rudenko. And his accomplices were detained in the morning in the apartments, where he raided. The collected data will now be evidence in court. All of them received salaries, pensions and subsidies in Ukraine, but planned to fight against his country on the side of the occupier. Information transmitted by phone, in particular, Sergey Laptev with the call sign “Picasso”, which in 2014 went to “Cossacks” so-called “LNR” and among relatives and friends found informants and spotters fire.

Three residents of the Watershed collected information about the deployment and movement of Ukrainian military units. Subsequently passed the Pro-Russian militants for money and with a huge hatred of all things Ukrainian. This is the second time exposure of the counter-intelligence not individual informants, and a network.

Last week, the Ukrainian counter-intelligence has exposed a network of traitors in Turecka. This is the second case during the antiterrorist operation, when covered with individual informants, and a network, which is created by Russian curators. Traitors are asked about the hatred to Ukraine, and one of them replies, “Because I was born in the Soviet Union, I don’t like that.”

As reported in this month’s Shevchenko district court of Kyiv has decided to arrest the Colonel of the Armed forces of Ukraine Ivan Bezyazykov, who is suspected of spying for the enemy. Bezyazykov – commissioned officer of the Armed forces of Ukraine, the head of intelligence of the former eighth army corps APU, disbanded in March 2015. According to the wife Bezyazykov Margarita Kushnirova, her husband was captured on 16 August 2014. July 5, 2016 evening bezyazykov was released from captivity of militants.