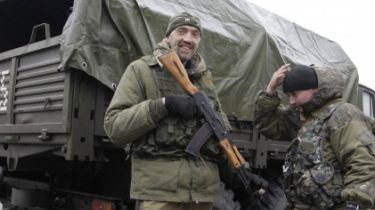 On the Mariupol direction, from the 82-millimetre mortars , rosasco-occupation forces fired at Krasnogorovka and from heavy machine guns and small arms – Starognatovka, Shirokino, Novotroitsk and Marinka.

On Donetsk the direction from mortars and heavy machine guns fired on Ukrainian positions near Luhansk, and from small arms – near Zaytsevy and Novoselivka Druha.

On Lugansk the direction from APCS occupants fired at the Hollow Koserow. Small arms – Crimea, and Crimson.

Read also: Militants of the “DNR” mass transportation of their families from the occupied territories – Tymchuk

We will remind, earlier it was reported that the observers of the special monitoring mission of the OSCE in two days, evacuated their patrol base from Svetlodarsk because of the attacks.

Three residents of the Watershed to collect information about the deployment and movement of Ukrainian military units. Subsequently passed on the phone Lugansk militants. Detained suspects simultaneously at dawn in their own homes. Mobile phones and recharge cards connection is now part of the evidence in the case of supporting the separatists.