Sleep Jack, eat on the bed: in Kiev, a family with six children lives in a room of 18 squares 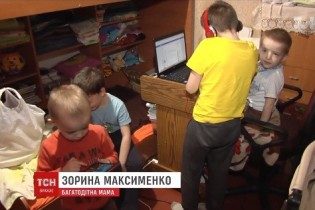 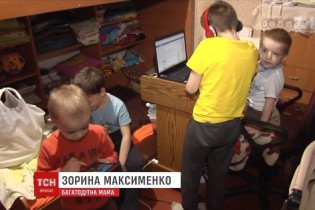 Sleep Jack, eat on the bed: in Kiev, a family with six children lives in a room of 18 squares

Maksimenko large family of eight living on 18 square metres. A preferential queue for an apartment in the capital they stood at number nine, but the queue moves backwards. This is stated in the story TSN.19.30.

Denis and Maxim came back from school and to complete the picture lacks only the Pope’s job. Each member of the family here a little more than two square meters. This means that even the bed is not for everyone. Sasha and Jack Pavlik sleep. For older children the bed is a Desk and a wardrobe.

Nastya a writing lesson also does in bed, for that she has a plaque. In this corner, she even manages to embroider, not paying attention to the noise. And recently the family Maximenko sixth child was born. The boy just took from the hospital.

The apartment used every inch of space, and things are even hanging from the ceiling.

Read also: In Kiev the teacher evicted from the apartment she got after 25 years in the queue for housing

Once it was a normal 3-room apartment with a kitchen, a bathroom and a toilet , but six years ago, three rooms sold different gospodarek and family Maksimenko was 18 square meters. Now it’s something like a communal apartment. In two adjoining rooms of other families reside, and the kitchen is just bursting with items.

Mom Zarina is in a privileged home turn, but the woman found out that the line moves back.

“When I stood in line, was ninth. In the early years were, it was already the 13th. All reason moving not forward, but backward,” she says.

Living eight to 18 square meters. The children do their homework on the bed, the things hung from the ceiling, and the sixth a newborn baby has no place to put the cradle. Large family Maksimenko a preferential queue for an apartment in the capital stood at number 9. However, the line moves only backward.

“The family that, relatively speaking, in 1998, consisted on the account and had five children, and later they will write a statement, they have prorent to the family Maksimenko, conditionally, if she was third, she becomes the fourth”, – says the expert of the division for the distribution of the living area Desnyanskiy district Anna Kucher.

See also: Vinnytsya region the official profited from the aid for families with many children

Have a family that is addressed later, but has older children, it appears at the beginning of the preferential queue. Zarina says that the process is not controlled, and therefore not transparent. The mother of six children assure officials she did not once say that the prospects to improve their living conditions illusory. And often accused the mother that gave birth to six children.

It is worth noting that the last time a large family in the area got an apartment for the budget bill three years ago.