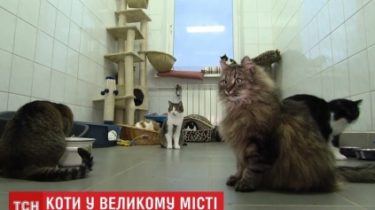 Kiev residents asked to leave access to these areas for animals.

Tovolunteer capital appeal to all the residents of apartment buildings to the closed attics and not brewed the window of the basement, because it will help save the lives of homeless cats. These animals are constantly suffering from cars, angry dogs and bad people, and in the winter need a warm area to keep from freezing to death, according to a story TSN.19:30.

In the meantime, the volunteers are forced to pick up the cats from the streets of the capital, because they are in danger of death. Some animals are lucky and from the shelters they are taken by the new owners to their homes. On the street the cats, especially who lived before people, chances of survival is very small. Therefore, animal rights activists filed a petition to the city Council to recognize the rights of cats to live in attics and in basements. This experience is, for example, in Ukraine and Poland.

Tovolunteer capital trying to save the lives of homeless cats

People turn to all the residents of apartment buildings do not close the attics and not brew Windows of the cellars. Claim it will help save the lives of stray cats, because animals are constantly suffering from cars, dogs and evil people.

The animal psychology Sergei Klochko this solution does not consider. In his opinion, the only thing you should care really is the sterilization of street animals. Every year in the capital sterilize about 4 thousand of cats, it allows them to control the population of four-legged homeless. In a special municipal institution has estimated that only 2.5 sterilization of thousands of cats helps prevent the appearance on the streets of Kiev 70 thousand draw animals.

In summer in Kyiv at the National Expocentre hosted a charity festival seals. The event was arranged to find homes for homeless furry and collect the necessary items and funds to animal shelters.