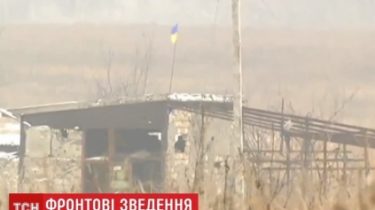 It could be the last trick of the terrorist, but the effects shots hid the darkness.

In the Donetsk region intensified reconnaissance groups of the terrorists. Last night they, taking advantage of the fog, crept up close to the positions of the Ukrainian soldiers and caused a lot of trouble, says the story TSN.19:30.

So, in position “Zenith”, which is near Avdiivka, a daring Thriller single-handedly decided to sneak to the Ukrainian trenches and to remove the blue and yellow flag. The saboteur quietly moved from the destroyed new terminal of Donetsk airport and nearly to our banner. However, the Ukrainian soldiers received timely notice of the enemy in the imager.

“Once we realized what it was – some kind of animal or something. It turned out, the silhouette, like the man was rapidly approaching the fishing Lodge where our guys recently installed a flag. Took a few shots through it after the silhouette disappeared,” said the defenders of Ukraine.

Intelligence of a terrorist group intensified in the East

Using the weather conditions of fog or snow, they crawl close to the positions of the Ukrainian soldiers and cause a lot of trouble. In particular, yesterday on the position of “Zenit” in the vicinity of the Town, a daring fighter decided to get to the Ukrainians and to shoot the blue-yellow flag. However, the Ukrainian fighters noticed the enemy in the imager.