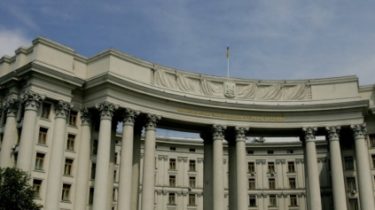 The Ministry of foreign Affairs of Ukraine urges the member countries of the UN to increase pressure on Russia because of violation of the provisions of declarations and conventions in the field of human rights.

The Ministry of foreign Affairs of Ukraine expressed its resolute protest to the Russian Federation due to prolonged repressions, unlawful detentions, searches and arrests, and torture and ill-treatment of Ukrainians.

“Despite numerous appeals of Ukraine and the international community demanding immediate release of the illegally detained and convicted Ukrainians, the Russian leadership continues the vicious practice of using Ukrainian citizens as hostages of its aggressive policy against our country,” – said in a statement.

As noted in the Department, the cynical disregard of fundamental human rights and freedoms “have turned law enforcement and the judicial system of the aggressor state in the repressive-punitive tools that contribute to the formation of a new totalitarian regime in Russia”.

Separately noted that Russia continues to ignore its obligations under the Minsk agreements regarding the exchange of hostages and illegally detained persons according to the principle “all for all”.

“Although in the Ukraine back six captives, their number has not decreased, but rather increased: we now know about the politically motivated withholding on the state of the occupant, at least 17 of the Ukrainians. Even more of our fellow citizens wrongly detained and arrested in the occupied Crimean Peninsula. More than 100 Ukrainians in a terrible condition of the prisoners of the Russian-terrorist forces in the occupied areas of Donetsk and Lugansk regions”, – assured the foreign Ministry of Ukraine.

However, Russia continues the systematic practice of unjustified refusals to Ukrainian consuls in granting permission to visit the Ukrainian political prisoners, in respect of which, according to the testimony, used illegal methods of interrogation, torture, methods of psychological pressure.

See also: electrocuted in the genitals and smothered in vomit. Afanasev has told about tortures by the Russian FSB

“In recent years, much aggravation acquired the situation of citizens of Ukraine who fraudulently were involved in illegal schemes for the dissemination of narcotic substances on the territory of the Russian Federation. In fact, the consequences of implementing such schemes is the recruitment and involvement of our compatriots in illegal activities on the territory of the Russian Federation”, – said the Department, noting that only in the course of this year in Russia it is osili almost 1,000 Ukrainians, to fabricate the materials.

The foreign Ministry assured that in this respect Ukrainians warn against trips to Russia and occupied the Ukrainian territory.

Read also: Ukrainian, who sits in a colony of Russia, told about the torture

The Ministry of foreign Affairs of Ukraine demands from the Russian Federation to immediately and without any additional conditions for the release of all illegally detained citizens of Ukraine, to stop the practice of political persecution and repressions against Ukrainians.

“We urge member States of the UN to take further consolidated steps to increase pressure on the Russian Federation for willful violation of key provisions of the universal Declaration of human rights, the International Convention on the elimination of all forms of racial discrimination, the Convention against torture and other cruel, inhuman or such that the degrading, inhuman or degrading treatment or punishment, the Convention on the protection of human rights and fundamental freedoms, the European Convention for the prevention of torture or inhuman or degrading treatment or punishment, and other fundamental international legal documents, as well as disregard for the requirements of the Resolution of the UN General Assembly A/C. 3/71/L. 26 “the State of human rights in the Autonomous Republic of Crimea and city of Sevastopol (Ukraine)”, – summed up in the treatment of diplomats.

We will remind, earlier accused the Russian authorities of planning terrorist attacks” in Crimea Evgeny Panov and Andrew Sahta recanted, which they gave immediately after the arrest in August of 2016.

Gentry also spoke about the terrible torturesthat he was used by the FSB: beaten with an iron pipe, hung and beaten with electric current.

See also: “You bury the fence.” A Russian activist has written about torture in prison