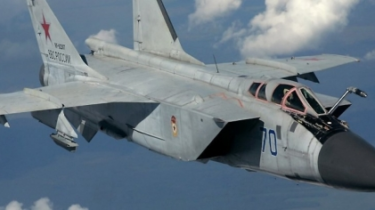 The decision on opening duty aircraft-interceptors (helicopters) fire warning and fire at a target is provided to the Minister of defence.

The Cabinet of Ministers of Ukraine allowed the military to open fire on aircraft that illegally violate the state border of Ukraine or are suspected of committing terrorist acts.

About it reports a press-service of the government.

“The destruction of aircrafts of armed forces of other States which violated the state border of Ukraine and use weapons and/or conduct airdrops of personnel, equipment, including the destruction of the unmanned aircraft violated the state border of Ukraine or are applied in the airspace of Ukraine to carry out a terrorist act, reconnaissance, jamming, provision of illegal armed formations”, – is spoken in the decree.

We will remind that earlier Russian reconnaissance aircraft flew along the Russian-Ukrainian border and flew into the airspace of Ukraine in the Black sea.

The flight of the Russian reconnaissance aircraft Tu-214Р is confirmed by the data portal Flightradar24.

In particular, the flight route passed along the entire Russian-Ukrainian border and in the South he broke the Ukrainian airspace, flying over Russian occupied Crimea.