Savchenko does not exclude new meetings with Zakharchenko and Plotnitskiy 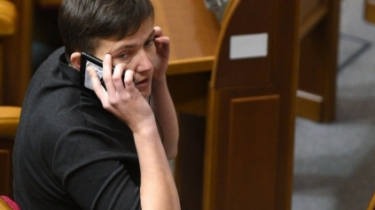 Savchenko does not exclude new meetings with Zakharchenko and Plotnitskiy

She expects to hold one such meeting in Kiev.

The people’s Deputy Nadezhda Savchenko is planning a new meeting with the leaders of the “DNR” and “LNR” Alexander Zakharchenko and Igor Plotnitsky and expects to hold one of them in Kiev.

She said this on air of one of Ukrainian TV channels, reports “Left Coast”.

“I do not think that these meetings must be constant and prolonged in time, as the Minsk process. But it was when we first met that potential and the next. I believe that we should not meet in 7-th, 12-th, 200-th kilometer. We are located in Ukraine. And next time can meet you in Lugansk and Donetsk, then in Kyiv. And I make application for the next meeting,” she said.

Recall, 11 December, the media reported a secret meeting of people’s Deputy of Hope Savchenko, the former captive of the Kremlin, with the so-called leaders of the “LDNR” Igor Plotnitsky and Alexander Zakharchenko in Minsk.

Itself Savchenko did not comment on this meeting about a day from the moment of dissemination of information about the negotiations.

December 12, Advisor to the Chairman of the SBU Yuri , Tandt said that the Ukrainian secret service nothing was known about the negotiations of the MP with the so-called leaders of the “LDNR” under the mediation of Russia. Even the SBU were not warned about the trip Hopes to Minsk.

The party “Batkivshchyna” condemned Savchenko talks with the militants. “Nadezhda Savchenko has recently announced its participation in a new political project. She’s not coordinating their actions with the faction and the party “Fatherland”, — said in the party, adding that there take the position of abstinence from negotiations with terrorists.

Press Secretary of the President of Russia Dmitry Peskov, in turn, has called the talks “informal”. “In this case, of course, such contacts can’t wear any interstate or any official status, but, of course, the Russian side was always ready to talk with those who want such a dialogue, whoever he was,” he said.

Finally, on the evening of 12 December, the MP told reporters that cooperates with the foreign Ministry and the SBU in the framework of the law.

“Regarding the meeting in Minsk. So, a meeting was held. In Minsk the trilateral format. With the presence of the Russian side and the presence of Zakharchenko and Carpenter from the “DND” and “LNB”. The meeting aimed to strengthen the Minsk group format and to make it more effective in the near future,” she said.

IN the “Fatherland” expelled deputies of his parliamentary group in the Verkhovna Rada. “Experience has shown that the principles and political beliefs of Nadiya Savchenko and “Fatherland” are not the same. In particular, the “Batkivshchyna” stands strongly against any negotiations with terrorists, against Amnesty for murderers of Ukrainians, against the legalization of armed groups in the Donbass”, – stated in the statement of the faction.

Also, the Verkhovna Rada of Ukraine supported the exclusion of Savchenko in PACE delegation.

MPs reversed its decision of two years ago, which has included Savchenko in the delegation. Although officially it is designed as a technical solution, parliamentarians do not hide that, in fact, its cause is Savchenko meeting with rebel leaders, and her statements about them. Itself Savchenko appeared today in Berlin, where for a European audience repeated his thesis.