In Kiev started a torchlight procession for the birthday of Bandera 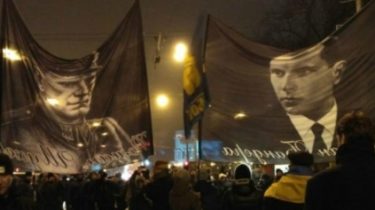 In Kiev started a torchlight procession for the birthday of Bandera

this Year celebrates the 108th anniversary of the birth of Stepan Bandera.

In Kiev started a torchlight procession, which is timed to the birthday of Stepan Bandera.

According to the information channel, in the procession attended by 500 people.

According to the Metropolitan police for law and order will follow about 700 law enforcement officers, including 250 members of the National guard of Ukraine.

1 January 2017 on the occasion of the 108th anniversary of the birth of Stepan Bandera will host events with mass participation of citizens.

Reinforced police will be on duty in the city center, public transport stops and in metro.

Police have urged participants of the mass events, residents and guests of the capital not to break the law, to comply with rules of conduct.