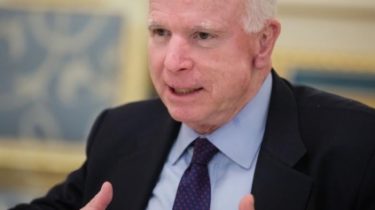 We hope to make 2017 the year of responsibility for the crime and convinced of American politics.

“We hope to make 2017 the year of responsibility. Time to deter Putin. It is time for new sanctions that will seriously hurt him personally, and the Russian energy sector and the banking sector,” said the Republican Senator from South Carolina Lindsey Graham.

“We urge our colleagues to adopt a more meaningful and tough sanctions against Russia for its hacking attacks on the United States,” said John McCain, adding that there is “clear evidence” intervention in Russia electronic resources of the US Democratic party.

Graham stressed that the three senators after the return will tell the Congress and everybody else, “that Russia made the Baltic States and making in Ukraine”.

Recall that us senators John McCain, Lindsey Graham and Amy Klobuchar arrived in Ukraine on December 30. The same day McCain and Graham who actively advocate for the protection of Ukraine and call upon the Executive power of the United States to provide lethal weapons to Kiev to counter Russian aggression, have received state awards “for personal contribution to strengthening relations between Ukraine and the USA”.

The next day the three senators, along with Petro Poroshenko welcomed the Ukrainian military command post in the village SHIROKANE near Mariupol.