The increase in revenues, the year of revolution and insights from history: Poroshenko said in his new year congratulation for Ukrainians 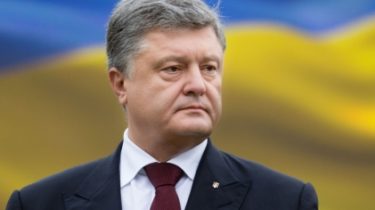 The increase in revenues, the year of revolution and insights from history: Poroshenko said in his new year congratulation for Ukrainians

The head of state stressed that the Crimea and the Donbass will return to a United Ukraine.

The President of Ukraine Petro Poroshenko addressed a televised new year’s greetings to the people from under the walls of St. Michael’s Cathedral in Kiev, which became one of the symbols of the revolution of dignity. The head of state highlighted the achievements of the past year and outlined the expectations from the new, 2017.

“Each of us, regardless of age, believes in miracles, especially in this festive season, which starts from St. Nicholas and ends right on Baptism. Especially this night, when the New year comes and fills our hearts with joy, faith, hope. And reasons for optimism today than a year ago. Easy still will not, but the worst, especially in the economy, is behind us,” said Poroshenko. According to him, Ukraine has overcome the shock of the destruction of industrial potential military aggression of a neighboring country, as well as the closure of the Russian market for Ukrainian goods, trade and transport blockade. The head of state said that the country’s economy adapted to the new conditions, and economic growth was restored. “And this lets in the new year to keep the policy of increasing the income of Ukrainians”, – said the President.

Poroshenko also noted that the state managed without the use of mobilization to strengthen the defense capability of the army. He remembered about the victory Jamala on “Eurovision”, the success of the Paralympic team at the Games in Rio and the victories of boxers. Among other achievements, 2016, the Ukrainian leader has allocated a total lack of purchases of Russian gas, which was a big step toward energy independence of Ukraine. “The coming year is a special one. This is the centenary year of the Ukrainian national revolution. But then the Ukrainians instead unite against external threats, began to fight among themselves. Now, if you don’t make conclusions, mindless political confrontation could very easily return the economy back into a nosedive, the policy is to plunge into anarchy, and the country – to make easy prey of the aggressor. The most important lessons of history do not forget even new year’s eve,” warned the head of state.

“I have learned. Other people’s mistakes are not repeated. And others don’t. Their main objective is maintaining the proper political conditions for the development of the country, and, of course, strengthen our defense capabilities, strengthening international support for Ukraine’s rapprochement with the European Union and NATO,” – said the President. And wished Ukrainians peace, victory, happiness and prosperity. Especially Poroshenko thanked warriors, whom he described as earthly guardian angels. “The whole country thanks you for what you give us peace this festive night, that warrant protection in the new year,” – said the head of state. Separately, he congratulated compatriots in Crimea, Sevastopol and certain districts of Donetsk and Luhansk regions, occupied by the enemy. “The Russian occupation is temporary. We will unite. And all will be well! Glory To Ukraine! And a happy New year!”, – concluded his speech the President.

Its festive greetings were attached to videopoetry from the winner of “Eurovision” Jamala, the Ukrainian Olympic athletes and President of the European Council Donald Tusk. “I am very happy that I can congratulate the whole of Ukraine and its wonderful part – my native Crimea – happy New year! I really want to realize all your dreams,” said singer Jamal and added a few words of greeting in the Crimean Tatar language. Paralympic champion Yelyzaveta Mereshko inspired faith in the victory, and the winner of the Games Maxim Kripak expressed the hope that the worst for Ukraine is behind us and the new year bring the end of the war. “Let all battles will be only in the sporting arena,” he said. Pole Donald Tusk expressed their wishes in Ukrainian language. “Dear Ukrainians, fraternal European people! Sincerely, on behalf of Europe, on my own behalf let me Express my best wishes on the occasion of Christmas and New year! You for me and for many Europeans as a sign of hope. Because in the past year, as in previous years, you showed the world what courage and determination in public life,” he said. And the Hero of Ukraine major General Andrii Kovalchuk said warm words addressed to the Ukrainian army, the soldiers of which protect the native land, loved ones, children and our Ukrainian New year.

New year’s congratulation of the President of Ukraine

Petro Poroshenko recalled the achievements and victories of Ukraine for the year 2016. The President urged not to forget the lessons of history and draw conclusions. “The main task I see the support of appropriate political conditions in the country’s development and, of course, strengthen our defense capabilities, strengthening international support rapprochement with the EU and NATO,” said Poroshenko. The President also remembered the Ukrainian soldiers and thanked them for protecting the country.