Fore: it became known how much the US spent to combat Russian aggression in Europe 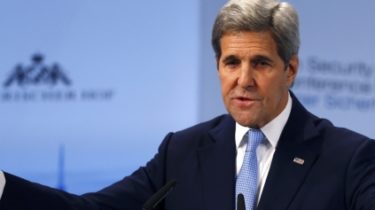 Fore: it became known how much the US spent to combat Russian aggression in Europe

Kerry spoke about the support of Ukraine.

USA has been consistent in the support of its allies and partners in Europe against the backdrop of threats that emerged with the beginning of Russian aggression against Ukraine, and spent on the support of more than $ 3 billion.

This was stated by U.S. Secretary of state John Kerry, writes UKRINFORM.

“In a transatlantic space, we strongly advocated and supported Ukraine and reacted to Russian provocations by extending the support of our allies in Northern and Central Europe”, – said the head of the US State Department.

“$3.4 billion is the amount that we spent to help our friends on the front lines, to help them build their defense and guarantee their security,” said Kerry.