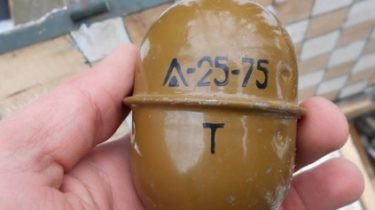 Pyrotechnics and engineers for a long period of time collected in front-line areas dangerous ordnance.

Pyrotechnics and engineers for a long time took them from the frontline areas.

Among the most dangerous shells from self-propelled guns and rocket artillery and anti-tank and anti-personnel mines that are banned by all international conventions, but they actively use by the militants.

A large quantity of ammunition gathered on the outskirts of liberated Slavyansk. The military said that the terrorists leave deadly surprises near schools, hospitals and facilities.

Since the beginning of ATO sappers defused almost eight masked mine traps. All of the collected ammunition was blown up on special range. And in order to fully clear the Donbass, said the rescuers will take more than one year.

Recall that in the Donbass detained the man, who was on the train trying to get ammunition. He was caught at the railway station of Mariupol.