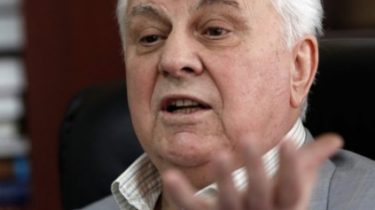 The first President outlined his vision in an interview with the Russian edition.

Leonid Kravchuk believes that Ukraine needs to “negotiate with Russia” to the aggressor country “decided to go forward, not to manage, and to meet and work together to solve problems”. About Kravchuk said in an interview to “echo of Moscow”.

Also read: No trade in Ukraine. The full text of the AP response on the scandalous article Pinchuk

While Kravchuk notes that ready-made recipe for conflict resolution had not, however he offers one, in his view, a possible scheme of negotiation.

“I offered (and still offer) the Kremlin to identify 5 persons of moral authority which has never been in power in parties, anywhere… were Not. Just moral authority. And Ukraine such 5. Let sit and write a document that needs to be done to stop war, and build relationships. Don’t need a brother, not necessary friend, you just human, partnership. Because we know what the end the brotherly elder brother sits on his little brother. Already we have seen, we know we should not do this – it is wrong,” the President said.

Developed the “authorities” document Kravchuk proposes to give to the presidents of Ukraine and Russia to sign and to follow it strictly.

We will remind, recently the Ukrainian oligarch Victor Pinchuk has offered to make “painful compromises” for peace in the Donbass, in particular, to remove from the agenda the issue of accession to the European Union, temporarily unable to raise the issue of Crimea and Donbass and to abandon NATO membership. In response, the presidential Administration said that no trade territory can not be.