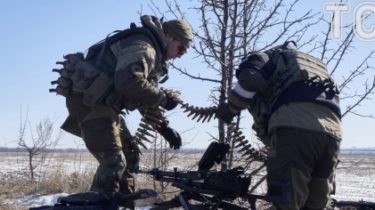 Weapons, infantry fighting vehicles the fighters used for attacks on the Trinity in the direction of Donetsk.

Over the past day militants 72 times opened fire on forces ATO, six Ukrainian military were wounded.

This is stated in the summary of the press center of staff ATO for the last day, January 7.

On Lugansk the direction from mortars of various calibers, the separatists fired at Trinity and Novooleksandrivka From grenade launchers and small arms – Lobacheva, Novooleksandrivka, Crimean, the Village Lugansk and Novozvanivka.

On Donetsk the direction with 82-millimeter mortars and APCS, militants fired at Trinity. From grenade launchers and small arms – Sands, Avdiyivka, Mayorske, new Lugansk and Lugansk.