The grey zone was the Ukrainian. During the war in novoluhans’ke never came the shells 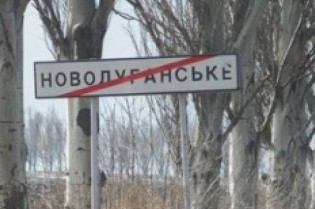 The grey zone was the Ukrainian. During the war in novoluhans’ke never came the shells

The village was occupied by the Ukrainian military.

In Novoluganskoe, near the occupied Horlivka, never came round for two and a half years of the war in the Donbass. Until recently, the village was considered a buffer zone. Journalists were not allowed there. But two weeks ago, nseleni item that the Minsk agreements – Ukrainian, took the soldiers of the battalion “Donbass-Ukraine”.

Fighter Vladimir, when we stopped in the gray village of Novoluganskoe, and could not imagine that I posters-artifacts of the Communist regime. Vladimir — 28. About the party and Lenin, he knows a little. On another closet of their new home fighter is also found past — pre-election agitation Yanukovych a fugitive.

Soviet star, labor orders and calls to vote for Yanukovych – two weeks ago the premises of state-owned enterprises and institutions is very reminiscent of the latest time of stagnation, telling Ukrainian soldiers. Then the battalion “Donbass-Ukraine” without a single shot went in novoluhans’ke.

“I thought that here there are flags of “new Russia” or some other Russia”, – says the commander of the battalion “Donbass-Ukraine”, “Black”.

Was surprised when the guys and how easily it fell, the inhabitants of the occupied territories. No absences every morning brought a bus.

Despite the fact that the village of Novoluganskoe is in the line of fire, war it didn’t hurt. In the center — the tree with garlands, and the Windows instead of strips of tape — bears, snowmen, Christmas trees. And all this silence, tell local, due to the fact that a few kilometers away from the pig farm. Work there, in particular, and people from the occupied territory. And the meat, some of it driven also in occupied Gorlovka.

The head of the local utility company personally behind the wheel of a digger delivers coal slag, which is sprinkled with slippery streets of the village. Whose is it, novoluhans’ke, V. Zavgorodniy surely can’t tell. Says once walked the Ukrainian military, the head of the pig farm here no longer seen. And tells why in two and a half years of war, the village remained unharmed.

Read also: Militants staged a deadly hunt for residents of Khartsyzsk and Krasnogorovka

“We have no great desire to go there. We have this interesting situation. These are the ones we consider separable, and those we think of dill. And we are in a gray area. People say that allegedly paid both to not fired”, – said Director of the municipal enterprise Novoluganskogo Vyacheslav Zavgorodniy.

The local grocery shop has it all, including a wide selection of meats.

With the arrival of the Ukrainian military, say people, the price of food has decreased. They say it happened because the neighbors of the occupied Horlivka now allowed. But there are recognized, and discomfort. Military and they closed the way in the so-called “DNR”.

“Soon” in the last two years here did not get, told the local. But if people tried to call 102, call, there, picked up the receiver and answered, “police of DNR”. Now the situation – doctors and police – correct. TSN conducted an experiment with the different parties Novoluganskogo called the number 102 – is heard everywhere, only a response to the Ukrainian language.

Silence on the front line and shelling Khartsyzsk: the situation on the frontline in the ATO area

Among civilians there are victims, their number turns out. About another civilian death was announced by the head of the National police of Donbass. It’s a girl who looked 25 years, her identity is now set. The village new Lugansk locals call the oasis. It is right on the line of contact, but never for two and a half years of war none of the equipment there did not fly.