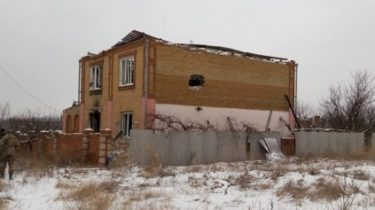 Over the last day militants fired at the Ukrainian positions more than 70 times.

On Christmas day the Russian troops, probably under the influence of alcohol, made a fatal fireworks on civilian homes in the town of Khartsyzsk, Donetsk region, where they themselves are based.

Among civilians there are victims, their number out. It is reported by Ukrainian intelligence, said the plot of TSN.19:30.

About another the death of civil rights said the head of the regional Department of the National police Donetsk oblast Vyacheslav Abroskin. It’s a 20-year-old girl from Krasnogorovka who was coming home from friends. Killed by an enemy fragmentation wounds body was found on the highway Krasnogorovka Staromykhailivka.

As for the Ukrainian military, over the past day, six soldiers were injured. The militants are increasing the intensity of the fire. For 24 hours – more than 70 provocation. The hottest spots are the towns of Trinity and the Crimean in Luhansk direction. There the Ukrainians were working with mortars. Over the past day no dead. This data is the headquarters of the ATO. Now the fight continues on the arc Svetlodarsk.

Silence on the front line and shelling Khartsyzsk: the situation on the frontline in the ATO area

Among civilians there are victims, their number turns out. About another civilian death was announced by the head of the National police of Donbass. It’s a girl who looked 25 years, her identity is now set. The village new Lugansk locals call the oasis. It is right on the line of contact, but never for two and a half years of war none of the equipment there did not fly.