In Khmelnytsky a cat for a decade “working” as a librarian 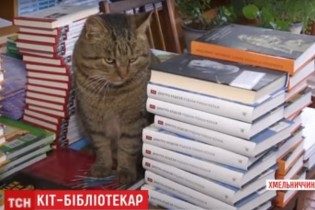 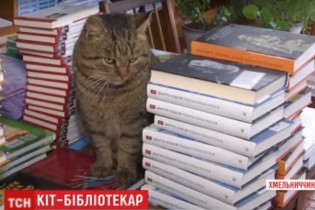 In Khmelnytsky a cat for a decade “working” as a librarian

Animal walks “on the job” five days a week.

In the town of dunaivtsi, Khmelnytsky region cat daily walks to the library as a job. For ten years the animal “earns” a leading specialist in the Department picking the local library. Has two days off a week and an eight-hour day. The salary is negotiable – fish and meat.

Every day at eight, he hurries to the library. A few minutes in the hallway to freshen up. Where sleeps bibliophile is not known for certain. Then the moustache instantly turns among stacks of books. Got books certainly new, it is good to smell the paint. Because it “works” in the Department books, and “reads.” His favorite movies are about animals and food.

“This is a typical biblical who loves literature. He likes books, which painted a mouse. If in life he is too lazy to catch them, then the books he loves looking at them”, – says head of Department Dunaevetsky city library Lyudmila Stavitskaya.

Biblioset – a valuable employee. He even wanted to win over to the local Museum to catch mice. However, on the same day returned to the library, because the caudate intellectual only sleeping and “read”.

Work is work, and lunch schedule. At noon “librarian” runs in a private dining room under the stairs and eats fish.

In his cat duties have long entered another almost the most important item is the afternoon NAP. And since the cat – intelligent, then falls asleep under the reading of the colleague a new product.

“He’s like a freelancer, he has bet, he works for food, sleep, warmth, love,” says library Director Elena Sidorovich.

Weekend cat in the library does not go. However, there was a case of recycling. Because it was evening, and closed baleen at work. However, the night in the library was without incident – no book has suffered. Côte bibliophile cats at work doesn’t drive. Because you haven’t met the one that would understand his passion for literature.

For food and heat: in Khmelnytsky found the cat, who for ten years “works” the librarian

Tailed bibliophile daily walks to the library as a job. In city Dunaevcy Khmelnitsky region for ten years the animal “works” as a leading specialist in the Department picking the local library. Has two days off a week and eight hours per day, salary negotiable fish and meat.