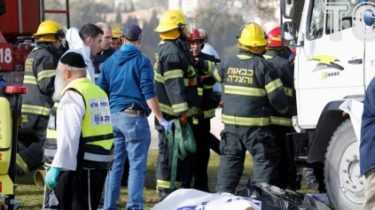 The US offered assistance to colleagues from Israel in investigating the horrific attack, which occurred on Sunday in Jerusalem, when a man drove a truck into the military, killing four people.

This was stated by the official representative of national security Council at the White house, Ned Price, writes TASS.

“We offer full support to our Israeli partners during the investigation into who is behind this attack that they carried out”, – he stressed.

As noted Price, the United States strongly condemns this attack. “Such dastardly acts cannot be justified,” he added, expressing condolences to the families of the victims.

We will remind, earlier the terrorist attack in Jerusalem condemned in the European Union, assuring that there is no justification for such crime.

Earlier it was reported that on Sunday, January 8, in the center of Jerusalem, near the Old city walls, a truck crashed into a group of soldiers. As a result of the incident killed four people, another 15 were injured, two of them are in critical condition.

According to the authorities of Israel, the terrorist was a supporter of the “Islamic state”. Later, the local press called the name of his attacker – a 28-year-old Palestinian, Fadi al-Kanbar.