The court withdrew the arrest of the Mall Gulliver 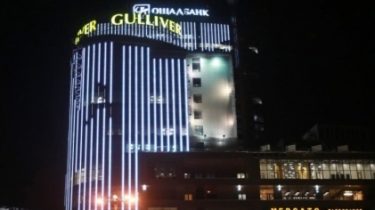 The court withdrew the arrest of the Mall Gulliver

The court of appeal did not find a confirmation of the illegal activities of the SEC, which stated the Prosecutor’s office.

The arrest of the “Gulliver” shopping Mall in Kiev is cleared. The decision adopted by the Kyiv court of Appeals, reversing the decision of Shevchenkovsky district court of capital.

About it reported in a press-service of the SEC.

Decision adopted on 27 December 2016, but the full text of the decision of the court of appeal received on 5 January 2017.

In its determination, the appellate court noted that after checking the arguments of the Prosecutor regarding the existence of grounds for seizure of Gulliver conclusions of the district court are unfounded. “As noted in the definition, the Prosecutor and the investigator provided no evidence to establish that the activities of the LLC “THREE O” (“Gulliver” shopping Mall) is associated with OJSC “Bank Mikhaylovsky” or “Acasian”. Data that would indicate the unlawfulness of such a relationship in the case file do not exist, and the Prosecutor at trial is not granted. Also there are no arguments and evidence that the complex Gulliver, who was arrested, could be used as evidence in the case of embezzlement of funds “Bank Mikhailovsky”. That is, except the assumption of the Prosecutor and presentation of factual circumstances of the case at the “Bank Mikhailovsky” Prosecutor’s motion contained no argument or evidence in support of its position”, – stated in the message of press-service. 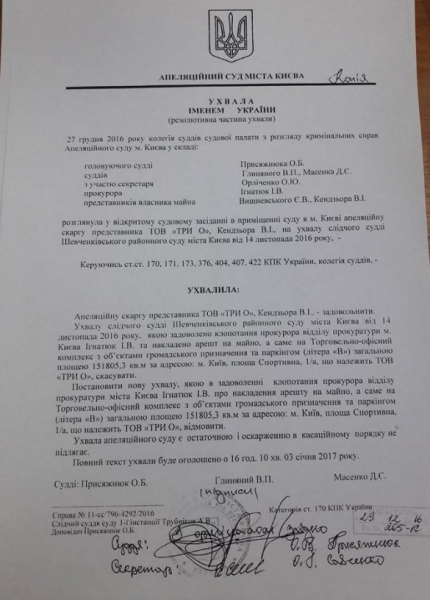 According to General Director of “THREE ON” Irene Krupp, seizure is a gross violation of property rights. “The court proved that it was purchased long before the creation of the Bank, “Michael”, and therefore arguments that the property was acquired through illegal activity are unfounded. A unique multifunctional complex, which is located in the heart of Kiev, continues to work and provides jobs for over 5,000 people,” she said.

On 25 November it became known about searches in Gulliver.

The Prosecutor General of Ukraine Yuriy Lutsenko said on his page in Facebook that the SEC imposed an arrest in the investigation of the theft in the Bank “Michael”. According to him, the investigation established that the owner of the Bank is LLC “Acasian”, 92.5% of which is the property of Viktor Polishchuk.

We will note that Polishchuk is the largest owner of network of hypermarkets “Eldorado”, the insurance company “Forte” LCD “Green quarter” and “Forest block”, and owes Ukrainian banks UAH 23 bn. Among these loans – loans by 1.3 billion UAH, issued by his own Bank “St. Michael”. Most Bank loans, he does not return for two years. Time serviced by only 0.1% (excluding accrued but not paid income of more than 3 months).

The Chairman of the Board “Michael” was arrested in August on charges of embezzlement 2.3 billion hryvnia Bank. In the SBU said that the suspect was headed by a commercial entity created by the top management of the Bank for attraction of money of physical persons under the “attractive” conditions. The money the criminals sent to the lending on their business projects. Accounts of physical persons opened in the Bank “Michael”. Therefore, after the elimination of financial losses of depositors should be compensated with the Deposit guarantee Fund of individuals.

The Deposit guarantee Fund of individuals ‘ deposits expanded the list of investors, “Michael”, which provides for compensation for “burnt” Deposit, 10626. Additional amount for payments has increased by almost UAH 100 million to 1 billion 327 million. The return of money to depositors was restored on November 4. A preliminary register of depositors numbered 46622 face. They received compensation of 19.7 thousand people for a total amount of 1.19 billion (97% of total registry).