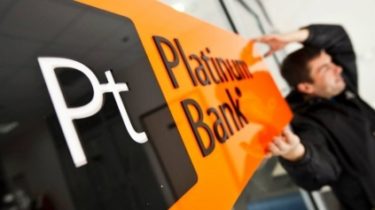 The regulator took the decision on 10 January.

The national Bank took commercial “platinum Bank” insolvent. The corresponding decision of the regulator adopted yesterday, January 10. The reason – the lack of capitalization of financial institutions, which according to the NBU requirements, the owners had to carry out before January 1, 2017.

“Of PJSC “platinum Bank” was submitted to the national Bank’s restructuring plan, which included the implementation of several activities aimed at capitalization of the Bank. For 2016, the management and owners of a substantial participation of the Bank has taken steps to meet the requirements for capitalization. In particular, through the repayment of loans to the borrowers related entities, providing non-repayable financial assistance from the shareholder, increasing the amount of collateral for loans,” – said in the message NBU.

However, as of January 1, the Bank has not reached a positive value of capital, and so it was declared insolvent.

We will remind, in June 2016, the NBU has recognized the opaque ownership structure of “platinum Bank”. Kaufman has applied to the NBU a package of documents for approval of acquisition of significant participation in the Bank in excess of 75% through a controlled company in August. However, the controller did not satisfy the request is still “because of the failure to provide certain documents, in particular, due to the lack of a permit from the Antimonopoly Committee of Ukraine for concentration. According to the National Bank, the Antimonopoly Committee in December of 2016 returned without consideration the documents regarding the acquisition of Boris Kaufman control at PJSC “platinum Bank”.

“Platinum Bank” (formerly international mortgage Bank) since 2005. Has an extensive network throughout Ukraine. On April 1, 2016, the Bank took 24-th place by assets (7,472 billion UAH) among the 109 that were in place at that time in Ukraine.

At the time, “platinum Bank” was headed by Ekaterina Rozhkova, who now is Deputy head of the national Bank.

Boris Kaufman had engaged in alcoholic business, but in 2008 he sold the brand “Myagkov” and the Odessa factory of sparkling wines. Focused on hospitality business that brought him two-thirds of the income. Eight years ago in partnership with Alexander Granovsky created the company Vertex United, which have combined assets of the hotel areas – 4-5-star hotel “the President Hotel”, “Bristol”, “London” and other assets investment and development direction, media assets: magazines “Focus”, “Focus. Beautiful country”, the site focus.ua. Five years ago, the “Forbes” magazine assessed the condition of Kaufman’s 116 million dollars.