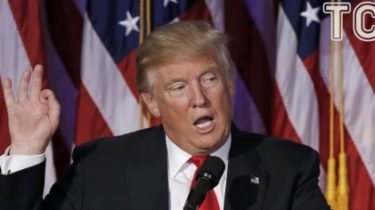 He believes news about his links with Russia fabricated.

The newly elected President of the United States Donald trump called a “witch hunt” information about his ties with Russia.

See also: “witch Hunt”: the trump commented on the accusations of the Russian Federation in the cyber attacks on USA

We will remind that earlier it was reported that the authorities of Russia for five years has supported Donald Trump and collected on his extensive compromising.

Such statements are contained in reports of the former British intelligence agent who, according to CNN, was the basis of the report of US intelligence about existing RF interference in American elections. Reports of a former agent, dated 2015-2016 years, published the American site BuzzFeed.

Moscow promised not to use incriminating evidence against the billionaire with a continuation of the cooperation. Russia leaked information from the US Democratic party, in response to trump, according to reports, tried to ignore “aggression of Russia in Ukraine”.

Read also: US Intelligence does not exclude the influence of Russia on elections in dozens of countries

We will remind that earlier the Republicans John McCain, Lindsey Graham, Robert Portman, as well as Democrats Ben Cardin and Bob Menendez introduced in the Senate a bill on additional sanctions against Russia due to the Russian cyber attacks and the situation in Ukraine. The proposed sanctions affect individuals and energy complex and the banking system.