Four wounded and one dead military: gunmen fired in all directions. Digest ATO 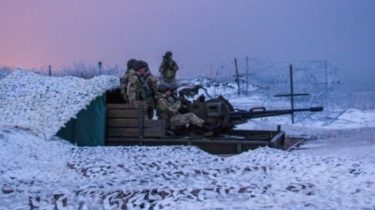 Four wounded and one dead military: gunmen fired in all directions. Digest ATO

Over the past day Russian-occupation forces have committed 62 attack.

In the area of ATO for the past day militants have carried out 62 barrage. In General, four Ukrainian soldiers were wounded, one injured and one died. This is stated in the summary of the press center of staff ATO.

So, on the Mariupol direction of the 120 and 82 mm mortar shells, the occupants fired at Krasnogorovka and Marinka. From grenade launchers and small arms, they fired on Pavlopol, Gotovomu, Granite, Water, Novohryhorivka, Szerokiego, Talakovka, Marinka.

See also: SCCC Representative explained why the militants to disrupt the breeding troops near the village of Lugansk

Also on the Lugansk direction from 122-millimetric artillery fired at Trinity. Of the 120 and 82 millimetre mortars and grenade launchers of various systems fired on the Novozvanovka and Trinity. Weapons of armored personnel carriers and heavy machine guns fired Krimsky. At the village of the Luhansk fired from small arms.

In Donetsk direction of the 120 and 82 millimetre mortars fighters fired at our positions near Avdeevka, Zaytsevy, Novgorod and Trinity. From grenade launchers and small arms, they fired on the plant, Maori, Northern, Novoselivka Druha, Iron, Verhnetoretskom and Zaitseve. Opitomy fire kept sniper, and on the plant – enemy infantry fighting vehicles.

We will remind, earlier it was reported that the insurgents a mortar hit in a five-storey building in Krasnogorovka, causing one person was injured.