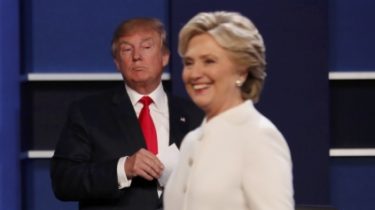 According to the publication, officials helped the Clinton headquarters to collect dirt on trump.

Ukrainian officials tried to influence the election of the President of the United States and help win the democratic nomination, Hillary Clinton, collecting dirt on his rival Republican Donald trump.

This writes the newspaper Politico, citing sources familiar with the situation.

According to interlocutors of the edition, Kiev helped the campaign staff for Clinton to expose the connection of Donald trump and his assistant Paul Manafort with Russia that was intended to damage his campaign.

In the end, these efforts influenced the election campaign trump Manafort resigned.

However, Politico notes that the Ukrainian efforts to influence the presidential campaign in the USA was much less coordinated or centralized than a hacker attack Russia and spread messages of the Democratic party.

The article States that there is little evidence regarding the involvement of Ukraine in the interference in elections of the President of the United States. In addition, rampant corruption, political and economic struggles that have plagued Ukraine – not to mention its conflict with Russian – made insolvent ambitious intervention in the elections of another country.

Politico also notes that the administration of the President of Petro Poroshenko with the Ukrainian Embassy in Washington insist that Ukraine remained neutral during the US election.

See also: Aggressive attacks against journalists and relations with Putin. What trump said at a press conference

However, the journalists are convinced that they have evidence of the intervention of Ukraine in the race. In their opinion, in the future it will backfire in relationships with the elected President of the United States Donald trump.

The dirt on the President: around Donald trump, a scandal erupted

The American press circulated the dossier for several weeks discussed in the White house and US intelligence. In the document – information that the Kremlin has something to blackmail the newly elected President of the United States, and next to the Trump people are in constant contact with Moscow.

We will remind, the United States imposed new sanctions against Russia. A message appeared on the website of the Ministry of Finance of the USA on Thursday, December 29.

Under the sanctions were the FSB, the GRU, the company DH Security, Autonomous nonprofit organization “Professional Association of designers of Informatics systems” and “Special technology center”. In addition, the U.S. 35 expelled Russian diplomats and their families.

Barack Obama ordered the intelligence community to prepare a report on Russia’s intervention in the U.S. presidential election.

Previously, the CIA said that Russia is deliberately carried out attacks during the election race, to help Donald Trump win the election, not in order to undermine the credibility of the electoral process of the country. In the investigation established the identity of those who were closely associated with the Russian government and WikiLeaks leaked thousands of messages of Democrats, including e-mail of the head of the election campaign of Hillary Clinton.

11 Jan American site BuzzFeed shocked the world by publishing a file on 35 pages, which stated that Russia has dirt on trump.

It notes that the FSB has dirt on trump regarding the incident that happened in one of Moscow’s top hotels. So, trump supposedly in the Deluxe room, where were President Barack Obama and his wife Michelle (which the President-elect hates), ordered prostitutes on the same bed staged sex show “Golden shower” (urination).

The document also says that Russia influenced the trump for the last 5 years.

The chief diplomat of the United States can become Rex Tillerson

This candidate chooses not the President, and the Senate. And the post meant Rex Tillerson, the former head of one of the largest oil companies, which had strong ties with the Kremlin. He promised to provide Ukraine with military support, called the Russian assault on Crimea as groundless and confirmed the failure to Moscow Minsk agreement and promised to extend sanctions.