In the occupied Lugansk massive fire occurred in the grocery warehouses 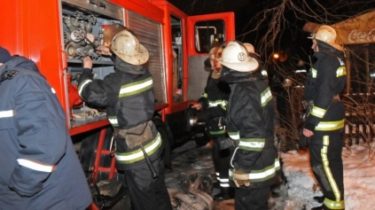 In the occupied Lugansk massive fire occurred in the grocery warehouses

One of the basic versions of a fire is called arson.

In the night of 12 January in the occupied Lugansk there was a large fire in the grocery stores.

This was reported by coordinator of the organization “right Right” Dmitry Snegirev on his page in Facebook.

He said that the burning warehouses on the territory of the enterprise “Luganskwater” at Lutuginskaya street,133.

As noted by Snegirev, about the nature and extent of the fire shown by the fact that localization of its consequences was established the headquarters of the fire, which was headed by the Deputy Minister of the so-called “MOE” pseudorepublic.

Notes that have been destroyed refrigerating trading equipment, food and internal wall cladding of warehouse space.

In the so-called “LNR” one of the main versions of the fire already referred to the deliberate destruction of property by arson.

“It is noteworthy that the fire on the territory of the enterprise appeared simultaneously on 4 sites. According to local sources the analytical Department KI “Right” employees of power structures of the self-proclaimed “LNR” one of the main versions of the large-scale fire in the food warehouses of the enterprise “Luganskwater” called willful destruction of property by an arson” – said in the message.

Also Snegirev said that earlier in the temporarily occupied the city of Crystal (Red Beam) during the celebration of Day of the motorist on the territory of the enterprise on the street. Simferopol as a result of arson massive fire occurred. During a fire damaged several units of public transport.

We will remind, in Kiev at the plant explosion after which fire broke out. According to preliminary data, the explosion occurred in a furnace for growing microcrystals of silicon. Rescuers were able to quickly extinguish the flames, which had spread only 10 sq. m. the fire injured two workers at the plant which burns gave the doctors.