Ukraine will fight for each prisoner, – Gerashchenko 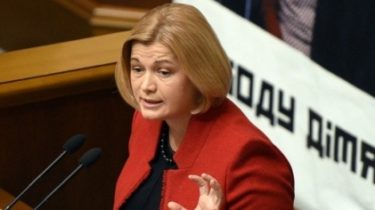 Ukraine will fight for each prisoner, – Gerashchenko

She stressed that the exchange of prisoners militants and Russia are used as an instrument of pressure on Ukraine.

First Vice-speaker of the Verkhovna Rada Iryna Herashchenko stressed that Ukraine fought and will fight for the liberation of each prisoner.

About it reported in Department of information and internal policy of the Donetsk oblderzhadministracii.

“We know the whereabouts of about 60 people, the SBU said about the number 119. However, finding all is quite difficult. Ukraine fought and will fight for every citizen, it is important for us to find and release all” – said Gerashchenko.

She stressed that the exchange of prisoners militants and Russia are used as an instrument of pressure on Ukraine to release criminals, while refusing to compromise and exchange people who are not related to the armed conflict.

According to Gerashchenko, members of the ORDO has not fulfilled a promise to release seven juveniles, which the Russian side accuses of carrying out “acts of sabotage” on the temporarily not controlled by the government of the territory. She also noted that the militants stopped to allow international organizations to work together to identify the dead and missing, will not allow you to visit places of detention and prisoners. In addition, the representatives of the occupied territories constantly provide various lists of prisoners from both sides. While installing, one of the Ukrainian defenders is in captivity is very difficult.

Read also: hostage Exchange again fell through due to the “mantra of Putin” – Gerashchenko

Recall, 15 December, was held a Skype-conference on the return of Ukraine to at least 42 peoplewhom hold the militants in the East. The day before talks were derailed.