Suspect in corruption Kiev judge ordered the arrest and bail 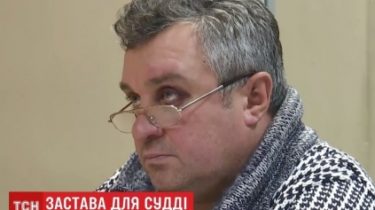 Suspect in corruption Kiev judge ordered the arrest and bail

Its size is not as big as demanded by the state prosecution.

The detainee to the judge of Economic court of Kiev Lubomir Golovatyuk set bail at 293 thousand. If the suspect won’t find this amount, he will sit two months in custody, according to a story TSN.19:30.

“The measure of restraint – detention is 60 days before March 12, 2017. To determine Golovatyuk Lubomir D. an alternative measure of restraint in the form of a Deposit of 190 living wages, which amounts to 293 thousand 360 hryvnias”, – declared the judge of Pechersky court of Vita Bartnicka.

The amount of 293 thousand. If you do not find that amount, will sit two months in custody. The judge of the commercial court suspected of fraud, he faces 8 years. He allegedly took 16 thousand dollars to help a single firm in a positive court decision. Detained a judge during the transfer of the second part means.

The Prosecutor requested bail of 4 million, however, lawyers noted that Golovatyuk – an honest judge and has health problems, especially after a mysterious beating, traces of which appeared after his detention by police officers.

Golovatyuk suspected of fraud, he allegedly took 16 thousand dollarsto assist a single firm in a positive court decision. Detained a judge during the transfer of the second part of money – 10 thousand dollars. If the fault of the judge is proved, he faces 8-year sentence.