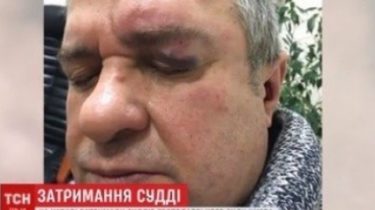 In the secret service called it nonsense.

The lawyer of the detained judges of the Economic court of Lubomir Golovatyuk Larisa Krivoruchko believes that her client was beaten during the detention. However, she notes that the judge has immunity, and after documenting the crime he should have been let go, according to a story TSN.19:30.

“Subjected to physical violence by the SBU. Beat him, wanted to confirm the fact of touching the money. He never touched them, rinse the hands did not take it,” – said Krivoruchko.

Bleeding ear and bruises under the eye: in the capital, beat up the judge of the economic court

On the eve of the Prosecutor General Yury Lutsenko reported that the judge Lubomyr of Golovatyuk detained for a bribe of 16 thousand dollars. Tomorrow needs to choose a measure of restraint. The detention of judges was carried out by employees of SBU. In the video, the process looks quite peaceful. The lawyers, the judges claimed that the SBU had beaten their client.

Golovatyuk is in the detention center, on Saturday, he needs to choose a measure of restraint. The press-Secretary of the security Service, in a telephone conversation told TSN that the information about the beating of a judge – nonsense.

As reported, the Prosecutor General Yury Lutsenko reported that the judge is detained for a bribe of 16 thousand dollars. For the right solution the entrepreneur is paid in two stages – during the handover of the last 10 thousand Golovatjuk and caught. The detention of judges was carried out by employees of security Service of Ukraine. The video, which was published by the SBU, the process looks quite peaceful. However, later appeared a photo on which the judge recorded with a bloody ear and a black eye.