Six dozen of the shelling and one wounded Ukrainian military. Digest ATO 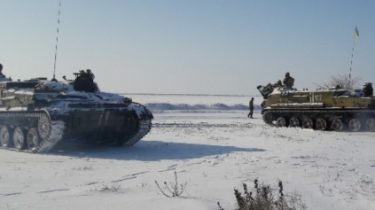 Six dozen of the shelling and one wounded Ukrainian military. Digest ATO

The militants fired heavy weapons in all directions.

Over the past day in the area ATO overall, there have been 60 attacks. One Ukrainian soldier was wounded. This reports the press center of staff ATO.

So, on the Mariupol direction of the 122-millimeter artillery the Russian occupation troops fired at Hnutove. Mortars of various calibres fired at Pavlopil, Krasnogorovka and Shirokino. Because grenade launchers, heavy machine guns and small arms were affected Palopoli, Hnutove, Shirokino and Krasnogorovka. Also sirocina and Marinka fire kept the sniper.

See also: Service at the checkpoint and disguise under local: police have detained three militants of the “DNR”

In Lugansk 120 and 82 millimetre mortars fighters fired at Novozvanovka and Trinity. The novozvanovka and even rocket-propelled grenades and small arms, and antitank missile complexes, the occupants fired gold, the Village Lugansk and the Novoaleksandrovka.

We will remind, earlier the Deputy Minister of the occupied territories and internally displaced persons Georgy Tuka predicted the beginning of the liberation of the occupied Donbass in the fall of 2017.