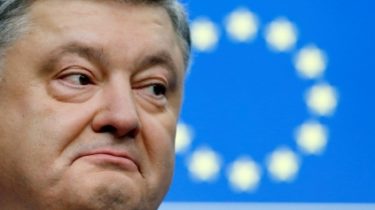 Ukraine has strengthened as an Outpost of Europe and the world in the fight against Russian hybrid of venom and aggression.

This was stated by President of Ukraine Petro Poroshenko during the annual meet the ambassadors.

He added that Ukraine should resist Russian attempt to build a new iron curtain, its alternative and alternative Europe.

“Undeclared Russia’s revenge – an attempt to undermine the very foundations of Western democracy. Soldiers of the Kremlin – not only military, but also corruption, terrorist mercenaries, pseudojournalism, hackers, and a total lie. Moscow wants to manipulate the right of Europeans to freely choose, as well as three years ago, wanted to deprive the Ukrainians of their European choice,” – said the head of state.

He added that “attempts to justify Russia’s actions or to take into account their interests is a reconciliation with evil, which will lead to even more tragic consequences.”

See also: In occupied Crimea has prepared its resolution to the UN on violations of human rights by Ukraine

Recall that Ukraine has filed a lawsuit in the international court of justice with the aim to attract the Russian Federation responsible for the Commission of acts of terrorism and discrimination for its illegal aggression against Ukraine.