“Cursed” place: Kiev complain of monthly accidents at the junction where the jeep was hit by three girls 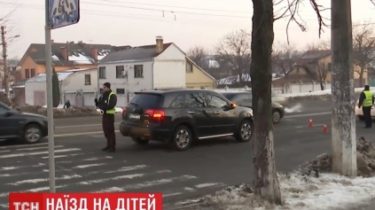 “Cursed” place: Kiev complain of monthly accidents at the junction where the jeep was hit by three girls

People ask the authorities to finally build the transition properly.

In Kiev, the SUV knocked down three children on a pedestrian crossing. Ninth-graders aerospace Lyceum coming from school and were crossing the road at a Zebra crossing, according to a story TSN.19:30.

After the accident the girls were taken to the trauma Okhmatdet. “We went to cross the road, no one expected,” says the pale from the experience angelina, which is several times after the accident, lost consciousness. The mother of 14-year-old girl also recovering from the shock. “There’s transition is so difficult, and there is no traffic light or speed bump. That these girls are alive, it’s just their God pardoned,” says the mother of the victim, Nina Butenko.

In Kiev, the SUV knocked down three children on a pedestrian crossing

Ninth-graders aerospace Lyceum coming from school and were crossing the road at a Zebra crossing. Probably, the car rear-ended and demolished children. All three with injuries in the hospital. One of the girls concussion, however, their life already threatens nothing. According to students, this intersection is very dangerous, the drivers drive at high speed and not notice pedestrians.

Doctors agree that kids are lucky – no fractures, they have just have suffered a suspected concussion. “Nearly nothing,” says the surgeon Elena Yakymchuk. Schoolgirls discharged from the hospital in a few days for them to be easy to maintain and conduct the necessary research to ensure that patients really are not threatened.

The SUV stopped a few meters behind the pedestrian crossing. He cracked the grille and barely noticeable bumper damage. A road without snow and ice, so it is unlikely that weather conditions caused the collision. Police journalists to the driver would not let themselves do not comment. Visually, the driver behaves appropriately and the smell of alcohol from him could be heard.

See photos: the Bloody accident in the center of Kiev: due to the collision of two cars killed a girl

Among informal versions of the accident is dominated by the ordinary negligence of the driver. The complexity of the road that a pedestrian crossing is preceded by a small rise, and then begins the descent and motorists simply do not see in advance the situation in the transition and no time to slow down. Locals say that the people on this site knock almost monthly. Parents of victims urge at least after this case to arrange the transition.