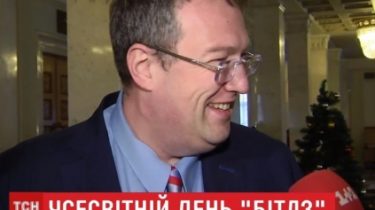 Ukrainian politicians remembered the youth and told about his attitude to the cult group.

Ukrainian MPs have decided to remember his youth and adolescence and sang favorite songs of the legendary band The Beatles. Among the interviewed journalists, the people’s representatives, not one who would be indifferent to the creativity of the “fab four”, according to a story TSN.19:30.

The leader of the “Opposition bloc” Yuriy Boyko said it continues to listen to The Beatles until now, and the former head of the Donetsk region Sergey Taruta admitted that in his student years, danced at the disco with the hits of the British. Oleg Petrenko reminded of painted name of a group of school desks, and the adviser to the interior Minister Anton Gerashchenko said that he had visited the scene of the murder of John Lennon and he was sorry that the life of such a wonderful person ended crazy.

Among the favorite songs of the Ukrainian people’s representatives most often mentioned Yesterday and Yellow Submarine. Agreed to sing them, and the people’s Deputy Goncharenko delayed Let it be. So Patriotic parliamentarians took part in the world day of The Beatles, which band celebrated the day before.

The MPs decided to recall his youth and adolescence. And also sang favorite songs of the legendary British group. Vocal Ukrainian lawmakers refer to the material TSN.