The Peninsula was never Ukrainian: Le Pen has promised to recognize the Crimea part of the Russian Federation 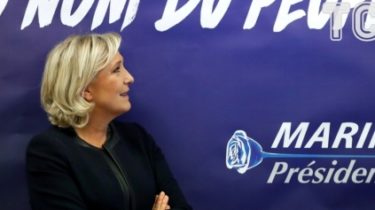 The Peninsula was never Ukrainian: Le Pen has promised to recognize the Crimea part of the Russian Federation

Also, Le Pen has promised to advocate for the abolition of anti-Russian sanctions.

The candidate in presidents of France, the leader of the party “national front” marine Le Pen has promised in case of victory on elections of the head of state to recognize the Crimea a part of Russia.

She stated this in an interview with Russian newspaper “Izvestia”.

“Yes, after the referendum, which showed the consent of the people to join Russia, I also recognize the Crimea part of the Russian Federation. The affiliation of Crimea to Ukraine was merely an administrative issue of Soviet times, the Peninsula was never Ukrainian”, — she said.

Also, Le Pen has promised to support the lifting of anti-Russian sanctions, calling them pointless and stupid.

According to her, advocating the abolition of restrictive measures against Russia, she thus restore normal relations” between Paris and Moscow. In addition, among the targets of Le Pen is to provide France’s independence from the United States and NATO.

We will remind, elections of the President of France will be held in April-may 2017. Polls show that the leader of the far right falls into the second round of elections. Earlier, Le Pen said that the victory trump at the election of the President of the United States increases its chances of winning in France.