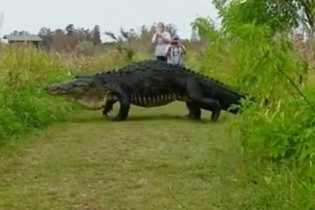 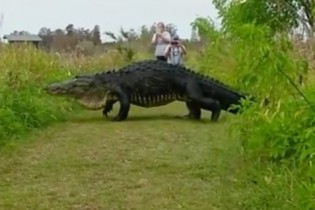 According to experts, the length of the animal is up to 4.5 meters and can weigh up to 350 pounds.

In Florida, near the American city of Lakeland, found a giant alligator.

The video, which depicted a reptile, has collected more than five thousand likes and about 30 thousands of posts in Facebook and caused an influx of visitors to the reserve, reports the Huffington Post.

According to experts, the length of the animal is up to 4.5 meters and can weigh up to 350 pounds. Locals have dubbed the giant “Mr. Hunchback” (Mr. Humpback).

It is reported that American alligators rarely grow longer than 3.4 meters. Well-known instances, having a length of 4.5 meters, but scientists could not confirm the information about the larger members of this species.

Recall that in Florida the mistress of the three-meter crocodile defended the right to keep the reptile house. The courts of women took a year. The concern of the authorities caused the size of the animal, which is constantly growing.