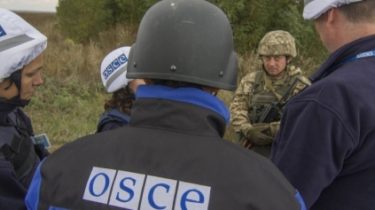 President of Ukraine urged Kurtz to facilitate the release of political prisoners in Russia and hostages in the Donbas.

President of Ukraine Petro Poroshenko said the head of the OSCE Sebastian Kurz to the question about the placement of armed police mission of the OSCE in the Donbas.

He welcomed the intention of the Austrian presidency to strengthen the technical capabilities of the OSCE SMM. The head of state noted that the settlement of the situation in the Donbass requires the use of the full potential of the OSCE. In this context, key importance is the continuation of German presidency’s work on the issue of placing armed police of the OSCE mission in the region.

President of Ukraine urged Kurtz to respond by all means possible violations by Moscow of the rights of Ukrainian citizens in the occupied territories and to facilitate the release of political prisoners illegally held by Russia, and the hostages in the Donbas.

Read also: OSCE revealed video, as the militants fired from the “forbidden” howitzers on the arc Svetlodarsk

As previously reported, the new OSCE Chairman Sebastian Kurz said that a full ceasefire must be the basis for holding fair and free elections in certain districts of Donetsk and Lugansk regions.