The militants want to exclude Gerashchenko from the Minsk process 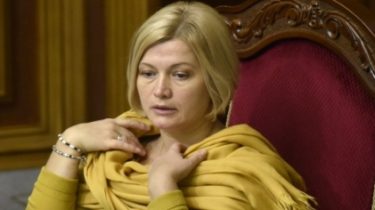 The militants want to exclude Gerashchenko from the Minsk process

They say that in the Ukrainian Parliament there are people who are respectful leaders ORDO.

The militants want to be excluded from the Minsk process , the Vice-speaker, the representative of Ukraine in the humanitarian sub-group of the trilateral contact group Irina Gerashchenko.

About it reports “Ukrainian truth” with reference to a source in the tripartite contact group to resolve the conflict in the East of Ukraine.

Representatives of the militants (who are not party to the negotiations in the trilateral contact group – ed.) began to use the same rhetoric as previously, to the Novel Immortal and Volodymyr Gorbulin to the post, about the alleged involvement Gerashchenko in “the coup”.

The militants said that, “in contrast to Gerashchenko, the Ukrainian Parliament there are people who are respectful leaders ORDO”. In addition, the militants in an aggressive form demanded from the representative of the OSCE prohibit Gerashchenko to give an interview, to talk about according to the leaders ORDO from Moscow.

See also: Gerashchenko announced the date of the Skype conference on the release of the hostages

We will remind that earlier it was mentioned that one of the leaders of “DNR” and the participant of the talks in Minsk Denis Pushilin accused Ukrainian side in the breakdown of negotiations and criticized the first Vice-speaker and representative of Ukraine in the humanitarian sub-group Irina Gerashchenko. Representatives of the “LDNR” recorded the fact that “discuss the exchange of prisoners without the presence at the meetings of Viktor Medvedchuk does not make sense“.

Note that the Medvedchuk in Minsk on Monday was not.