What will happen to the hryvnia, salaries, retirement age and the loan from the IMF. Answers from Groisman 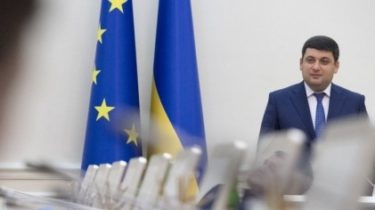 What will happen to the hryvnia, salaries, retirement age and the loan from the IMF. Answers from Groisman

The Prime Minister assures that the NBU will keep the hryvnia from further fall.

The current instability of the hryvnia on the foreign exchange market is a seasonal phenomenon and the national Bank has the resources to keep the national currency from further fall. Meanwhile, more Ukrainians will bring jobs and higher wages. A key objective of the future pension reform is a reduction in the deficit of the Pension Fund.

On this day, January 17, during his visit to the Chernihiv region told Prime Minister Vladimir Groisman, reports UNIAN.

FLUCTUATIONS OF THE HRYVNIA

“I think the fluctuations are seasonal. Many factors pressure, the rate increased over the period of time when business activity has decreased. It is natural. But I talked to the head of the National Bank (Ministry of Finance), and she very clearly assured me that the national Bank is doing everything in order to prevent speculative fluctuations. Foreign exchange reserves in the country is enough that the situation was normal and remained within forecast parameters. Fluctuations will stop,” – said Groisman.

THE PROVISION OF UKRAINIANS WITH WORK AND WAGES

“Jobs and high salaries is a priority for us. As well as education and the opportunity to find their place in the real sector of economy”, – said Groisman.

Recall from 1 January 2017, the minimum wage increased twice – up to 3,2 thousand UAH. Additional expenditure provision for raising the minimum wage, according to government estimates, will amount to $ 28 billion. In addition, from the beginning, entered into force legislation that, inter alia, provides for the imposition of a penalty for paying salaries “in envelope” in the amount of 100 minimum wages, i.e. UAH 320 thousand.

Groysman is convinced that raising the minimum wage does not affect the hryvnia exchange rate fluctuations.

“We have to deal with the pension system and to do everything to increase pension. There is no other option – people live below the poverty line. And it is our task to find reserves and to pay tribute to the people. And now we are talking about changing the pension system, which will reduce the Pension Fund deficit. We are already doing. Unshadowing, higher salaries, give them (the reduction of the budget deficit of the Pension Fund),” – said Groisman.

The Prime Minister also commented on the possibility of raising the retirement age.

“I hear some of the forecasts (raising the retirement age), it talks about nothing. Tried to undermine the country through tariffs – did not happen. Looking for something in particular retirement age, to intimidate people. But I want to assure you that we will not do anything bad against citizens. Every step will be skipped through the heart with the understanding of how living citizen. We will honestly engage in dialogue with society,” – said the head of government.

A LOAN FROM THE IMF

Ukraine continues negotiations with the International monetary Fund on receipt of the next tranche of the loan in the amount of $ 1 billion. However, the date of the meeting of the IMF Board of Directors where a final decision has not yet been determined. Before that has yet to agree on the updated Memorandum of cooperation.

“We are in constant dialogue with the IMF. The Ministry of Finance carries on negotiations”, – said Groisman.

Meanwhile, information about potential new items and tasks for Ukraine from the IMF has already leaked to the media. There are items about raising the retirement age in the government disagree with this assertion.