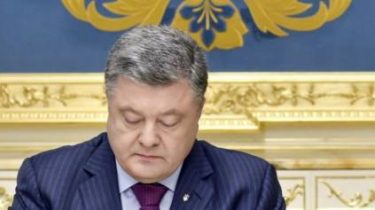 The President of Ukraine Petro Poroshenko has dismissed Chairman of Liuboml district state administration of Volyn region who lost on a bribe in 2 thousand dollars.

The decree was published a press-service of the head of state.

“According to part 3, article 154 of the Criminal procedural code of Ukraine to exclude Parhomuk Nikolai Alexandrovich from the post of Chairman Liuboml district state administration of Volyn region”, – the document says.

We will remind, the Chairman of Lyuboml RGA caught the trick at the end of March. As reported, the Prosecutor General Yuri Lutsenko, the official received money for the allocation of 16 hectares of land.

“The amount of rent was reduced several times and allocated at the expense of unclaimed land shares (shares)”, – he wrote.